Last week we reported on the Halliburton Loophole to the Safe Drinking Water Act of 1974. It’s the law that Dick Cheney engineered in 2005 that enables the oil and gas industry to keep from telling us what chemicals they use in fracking fluid. Under the law, companies are able to claim that these chemicals are protected “trade secrets” that they don’t have to disclose.

It often happens that, as soon as I write a post, there’s a news item that amplifies my understanding of how much the world is tilted in favor of Big Oil. This one was no exception, and it’s pretty unbelievable.

If you follow the news about the Bakken, you probably noticed that there was a recent nasty spill near Tioga in northwestern North Dakota that spewed a toxic mist over nearby farms. The leak was plugged on Tuesday.

According to a news report, “the well sprayed mist and emitted hydrogen sulfide, prompting air-quality monitoring and road closures in the area near Tioga after it was discovered Friday. The spill was contained to the well site, according to the well owner, which said it was still assessing how much liquid leaked.” Nearby residents, who live as close as 1200 feet from the well, were advised “to shelter in their homes.” 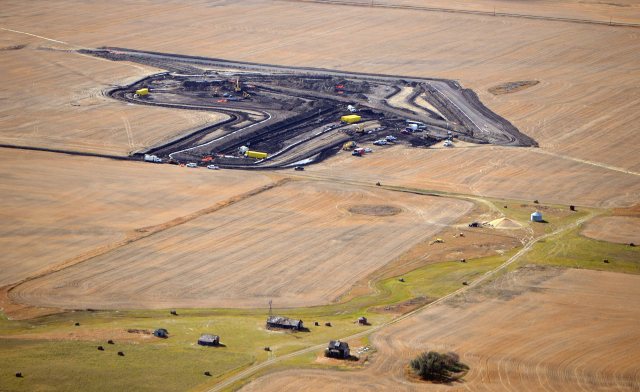 Some of the mist migrated off site. Levels of hydrogen sulfide, a potentially dangerous product of the natural gas that is usually burned off or captured at well sites, reached as high as 20 parts per million, according to Terry O’Clair, the state Health Department’s air quality director.

I’m sure the people “sheltering in their homes” appreciate your concern.

But here’s the thing that really got me about this story:

Alison Ritter, a public information officer with the Department of Mineral Resources, said the well is on confidential well status, which limits the amount of information her office can release to the public about the well for six months. The status is granted to entice exploration and protect oil companies from competitors.

So, in other words, the people who lived 1200 feet away and had a toxic mist sprayed over them don’t get to find out what toxins they have been exposed to for six months? To protect Emerald Oil’s trade secrets? And North Dakota feels it needs to grant this “protected status” to “entice exploration”?

Come on. North Dakota isn’t having any problems enticing exploration. Saying you need to protect the chemical content of fracking fluid to entice exploration is like saying you need to protect the identity of a teenaged girl’s perfume to entice her boyfriend to be interested in kissing her. It’s not really necessary. A company’s trade secrets protection ought to end when they start spewing toxic mist around the neighborhood.

The Moses family has lived on the Stillwater River since 1974, when George and Lucile Moses retired and moved to the Beehive from the Twin Cities. They’re gone now, but their four daughters (pictured at left, on the Beehive) and their families continue to spend time there, and have grown to love the area. This blog started as an email chain to keep the family informed about the threat of increased fracking activity in the area, but the desire to inform and get involved led to the creation of this blog.
View all posts by davidjkatz →
Aside | This entry was posted in Bakken, Fracking Information and tagged Bakken, Halliburton Loophole, Safe Drinking Water Act. Bookmark the permalink.