The next hearing of the lawsuit filed by the Beartooth Front Coalition against the Stillwater County Commissioners will be held at the County Courthouse in Columbus  at 2:00 pm on Thursday, May 14.

Because of coronavirus restrictions, the hearing will be held live on Zoom. In person attendance is not allowed.

Background.
Landowners began working on a proposal to create a special district in October 2013, when the Billings Gazette announced that a Denver oil and gas operator had opened an office in Billings with the intention of “bringing a little bit of the Bakken” to the Beartooth Front. At the same time a drill pad appeared off Highway 419 near Dean.

Local residents of southern Stillwater County were alarmed that this kind of development could occur without any advance notice or planning for the mitigation of potential impacts to natural resources and the financial interests of private landowners.

They approached the Stillwater County Commissioners to request support for a citizen-initiated zone to ensure that any future drilling was done with proper consideration for the unique character of the Beartooth Front area. Their intent was not to block drilling, but to make sure that it was done right.

The Commissioners refused to meet with them or provide support. Undeterred, the group decided to form a citizen-initiated zone, which required a supporting petition signed by 60% of local landowners. They collected over 575 signatures, which they presented to the County in November 2015.

The County ignored and delayed validating the petitions, finally announcing in  August 2017 that the group had surpassed the required 60% of signatures.

But there was a hitch. The County decided to interpret Montana law in a way it has never been interpreted before, saying that the law required the signatures of not only 60% of the landowners, but 60% of the underlying mineral owners. The petitioners were left with no choice but to sue for their rights. 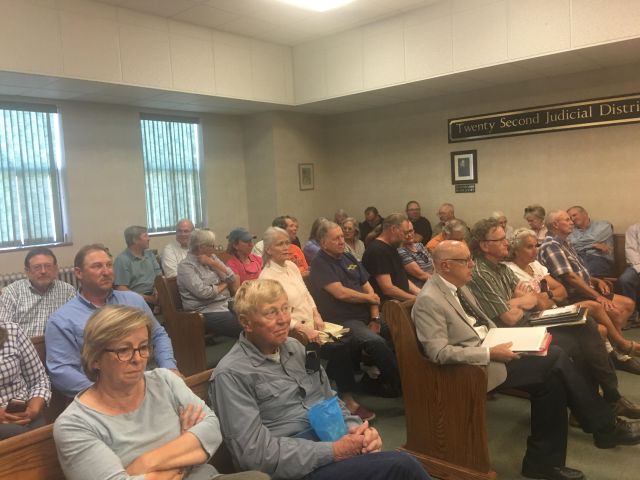 Local landowners showed up in force at a hearing in Columbus

The suit has wended its way through the courts, surviving a motion to dismiss by the County and a change of judges, as well as an unsuccessful attempt to have the County Planning Board consider including the zone as part of a countywide zone.

This hearing will lead to a decision by Judge Matthew Wald, which will be the final decision in District Court.

The Moses family has lived on the Stillwater River since 1974, when George and Lucile Moses retired and moved to the Beehive from the Twin Cities. They’re gone now, but their four daughters (pictured at left, on the Beehive) and their families continue to spend time there, and have grown to love the area. This blog started as an email chain to keep the family informed about the threat of increased fracking activity in the area, but the desire to inform and get involved led to the creation of this blog.
View all posts by davidjkatz →
This entry was posted in Community Organization, Uncategorized and tagged Stillwater Beartooth Front Zone, Stillwater County Commissioners. Bookmark the permalink.