A friend sent along something this week that really brought home to me how disturbing it is to imagine uncontrolled oil drilling along the Beartooth Front.

Regular readers will recall discussions we’ve had about the lease of BLM minerals in the Dean area.

The BLM parcel we’ve focused on is adjacent to the private lease near Montana Jack’s, where Energy Corporation of America has built a well pad on private property.

The BLM recently did an environmental impact report on this lease, and partly based on your public comments, made a decision to defer leasing for at least a year.

Fishtail Basin Ranch
Just a short distance away from this parcel is the Fishtail Basin Ranch, the setting for a recently-released documentary film called Fishtail. The film was written and directed by Andrew Renzi and co-written by Tylee Abbott. It was shot on location at the ranch over the course of three days, and released in April .

The hour-long film depicts modern day cowboys as they work through calving season at the ranch. It was one of twelve documentary films selected to be screened at this year’s Tribeca Film Festival in New York City. 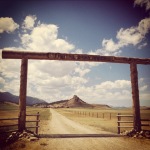 “The only narration is a beautiful, rough recording of Harry Dean Stanton reading poetry…. I was mesmerized throughout. The 16MM cinematography gives the film the feel of a classic western. It’s faded colors and film grain make this an ode to a time gone by.

“These cowboys are among the last of their kind. They are a group who thrived 150 years ago but have slowly been dying. Renzi’s film captures this sense of melancholy through Stanton’s narration and the cinematography, but it is also a testament to those who live and love this rough way of life. These men rise at sunrise and work through the day caring for these animals.  Their job is their life.…

“The sun-drenched, mystical cinematography by Joe Anderson ranks among the best I’ve seen this year.”

Here is the trailer for the film: 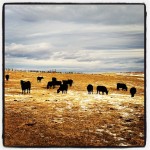 This evocative trailer got me thinking. Right here in our back yard we have this historic way of life that is being glorified in New York, yet we’re contemplating allowing uncontrolled drilling in the exact same place. If we don’t act, this glorious way of life could well become a thing of the past. Imagine these incredible scenes with oil wells stuck right in the middle.

It’s important for an area as amazing as ours to set the terms for how oil drilling comes here. The law allows it. A way of life requires it. Local action — your action — is needed to preserve this way of life.

Rumor has it that there may be a showing of the film in the area, perhaps in early August. Watch this space for more information.

The Moses family has lived on the Stillwater River since 1974, when George and Lucile Moses retired and moved to the Beehive from the Twin Cities. They’re gone now, but their four daughters (pictured at left, on the Beehive) and their families continue to spend time there, and have grown to love the area. This blog started as an email chain to keep the family informed about the threat of increased fracking activity in the area, but the desire to inform and get involved led to the creation of this blog.
View all posts by davidjkatz →
This entry was posted in Community Organization, Politics and History and tagged BLM parcels, Dean, documentary, Fishtail, Fishtail Basin Ranch. Bookmark the permalink.