The EPA is not testing to see if injection fluids are contaminating our water. We need to take responsibility for doing it ourselves.

Your tax dollars at work…

Last month the federal Government Accounting Agency released a report on the Environmental Protection Agency (EPA) program to protect underground water sources from the injection of fluids associated with oil and gas drilling.

If you’re a regular reader you won’t be surprised by what they found out.

The EPA’s role
According to the report, the EPA’s role in the Underground Injection Control program is to oversee and enforce fluid injection into wells associated with oil and gas production, known as Class II wells. EPA has approved 39 states to manage their own class II programs, and EPA regions are responsible for managing the programs in the remaining states.

The study was conducted because

Every day in the U.S. at least 2 billion gallons of fluids are injected into more than 172,000 wells to enhance oil and gas production, or to dispose of fluids brought to the surface during the extraction of oil and gas resources. These wells are subject to regulation to protect drinking water sources under EPA’s UIC class II program and approved state class II programs. Because much of the population relies on underground sources for drinking water, these wells have raised concerns about the safety of the nation’s drinking water.

There were two major findings, from the report:

I’m about as shocked as Captain Louis Renault in the film Casablanca:

That the federal government is not doing its job shouldn’t shock you. Some time ago we revealed that the Bureau of Land Management, another federal agency, is failing to inspect high risk wells.

The takeaway for us
What’s the takeaway for us along the Beartooth Front? The oil and gas boom has exploded over the last 10 years. It’s growth has outstripped the ability of federal and state agencies to protect citizens against water contamination. It’s as true in Montana, which has only seven well inspectors for the entire state, as it is in North Dakota or anywhere else. In Montana, those seven inspectors are responsible not only for the 1,062 class II injection wells in the state, but also for the other 10,000 wells across the state.

There’s also no transparency in the way Montana does inspections. Just yesterday Northern Plains Resource Council sent a letter to the Montana Board of Oil and Gas Conservation (BOGC) demanding that they publish their data on the Internet. Right now you have to go into BOGC’s offices in Billings to research anything having to do with well inspections. 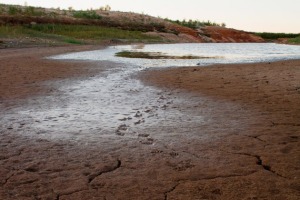 A view of the dry bed of a reservoir in Texas. Records show that environmental officials have granted more than 50 aquifer exemptions for waste disposal in that state. Courtesy of ProPublica

This is not just a record-keeping problem. Class II injection wells are responsible for substantial pollution across the country. The EPA has a long history of granting exemptions to oil and gas companies to pollute aquifers, often in drought-stricken Western states.

This may sound like a perpetual refrain, but there’s only one way to protect our water. It’s local regulation to demand that oil and gas operators use highest and best management standards when they are drilling in Carbon and Stillwater Counties. Here’s the kind of standard that would be built into those regulations:

Comprehensive water testing at least once every three months during the period of active well operation, and at least once a year for the next 20 years following completion for every water well within three miles of each well bore. The testing is to be done at the expense of the oil and gas operator, and the results must be provided to the County planning and zoning committee, which shall publish the results on a public web site. Testing must be conducted by an independent Montana state licensed engineer.

We should set the rules for how oil and gas drilling occurs in our back yards, and we should set up enforcement mechanisms to make sure the rules get enforced.

The Moses family has lived on the Stillwater River since 1974, when George and Lucile Moses retired and moved to the Beehive from the Twin Cities. They’re gone now, but their four daughters (pictured at left, on the Beehive) and their families continue to spend time there, and have grown to love the area. This blog started as an email chain to keep the family informed about the threat of increased fracking activity in the area, but the desire to inform and get involved led to the creation of this blog.
View all posts by davidjkatz →
This entry was posted in Community Organization, Fracking Information, Uncategorized and tagged EPA, highest and best management standards, injection wells, water contamination, well monitoring. Bookmark the permalink.

4 Responses to The EPA is not testing to see if injection fluids are contaminating our water. We need to take responsibility for doing it ourselves.