No sooner did we get the exciting news from Paris about the international climate agreement than my good friend Steve Daines sent me an invitation to attend the third annual Montana Energy Conference in Billings on March 30-31. According to Senator Daines, it’s an opportunity to “continue the discussion on state and national energy opportunities and provide an all-encompassing look at Montana’s energy potential.”

I was really excited to see that our junior Senator has jumped on the bandwagon to transition Montana’s energy portfolio from fossil fuels to clean energy. This kind of leadership is exactly what’s required to help us meet the treaty’s ambitious goals for reducing carbon emissions.

I went over to the event web site, where I discovered that the conference will have a “fresh new look and perspective,” and that “energy professionals, policy and decision makers at all levels” will take “an all-encompassing look at Montana’s energy potential.”

This is exactly what we need! 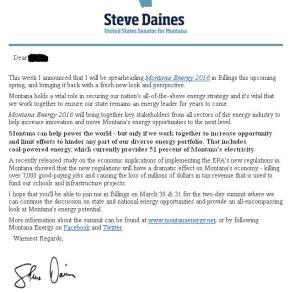 Or maybe not. As I dug a little deeper, I noticed that the conference will be an opportunity to “limit efforts to hinder any part of our diverse energy portfolio. That includes coal-powered energy, which currently provides 51 percent of Montana’s electricity.”

And then I saw that the EPA’s new regulations will “kill over 7000 good-paying jobs and causing the loss of millions of dollars in tax revenue that is used to fund our schools and infrastructure projects.” That’s the same nonsense the coal and gas people have been spewing for months.

That’s when it hit me. This conference has nothing to do with the Paris climate agreement. It has everything to do with propping up dying industries while the rest of the world heads in a completely different direction. And Steve Daines is still working for the same groups that have always bought and paid for his services.

Never mind. I guess I won’t be attending.

Related:
A debate between Montana Senator Steve Daines and Pope Francis on climate change
Announcing the latest winner of the Rex Tillerson fracking hypocrite award
Rex Tillerson admits humans cause climate change; Steve Daines doesn’t get the message
Montana elected leaders’ response to Keystone XL decision is unanimous, but not visionary
Where is Montana’s “man on the moon” leader?
Congress is very busy doing absolutely nothing about regulating oil and gas
From Washington to Helena, we subsidize the most profitable oil companies with billions of dollars of unnecessary tax breaks and direct subsidies

The Moses family has lived on the Stillwater River since 1974, when George and Lucile Moses retired and moved to the Beehive from the Twin Cities. They’re gone now, but their four daughters (pictured at left, on the Beehive) and their families continue to spend time there, and have grown to love the area. This blog started as an email chain to keep the family informed about the threat of increased fracking activity in the area, but the desire to inform and get involved led to the creation of this blog.
View all posts by davidjkatz →
This entry was posted in Community Organization, Politics and History, Uncategorized and tagged Montana Chamber of Commerce, Montana Coal Council, Montana Contractors' Association, Montana Energy Conference, Montana Environmantal Information Center, Montana Green Power, Montana Petroleum Association, Montana Renewable Energy Association, National Resource Defense Council, Northern Plains Resource Council, Senator Steve Daines. Bookmark the permalink.