On October 24, 2013 Energy Corporation of America (ECA) opened an office in Billings in conjunction with an announcement of plans to expand development of oil and gas leases along the Beartooth and Bighorn mountains. ECA CEO John Mork said he envisions bringing “the Bakken to the Big Horns [and the Beartooths] … and fundamentally changing these areas the way it has changed other areas of the United States.”

This post looks at ECA and their current activities in Carbon County.

About ECA
ECA was founded 50 years ago, and since 1979 the company’s corporate headquarters has been located in Denver. The company’s operations are totally dedicated to oil and gas drilling, initially on the East Coast and in the Appalachian Basin from New York to Kentucky, where they have been active for 45 years.

To give you an idea of the scope of their operations, ECA owns over 1 million acres from New York to Tennessee, and operates over 4,600 wells and over 5,000 miles of pipeline. The company has more than 10,000 drilling locations, with over 15 trillion cubic feet (TCF) of resource potential and more than 400 billion cubic feet (BCF) of proved reserves. ECA also has the capability to transport over 55 mmcf/d through multiple pipeline systems. In the past five years, ECA has drilled as many as 100 wells in a year, with up to 6 active drilling rigs operating at one time.

Suffice it to say they are a big organization with tremendous capabilities.

In its Rocky Mountain Division, ECA holds multiple high-potential oil prospects and is beginning development of its reserves of over 60 million barrels of oil in Carbon and Stillwater Counties. ECA also has shallow gas holdings and owns and operates existing gathering and transportation infrastructure.

ECA also has operations in Texas and New Zealand.

Current ECA activity in Carbon County
The information in this section comes from publicly available sources. You will need a password to view it.

ECA currently has two operating wells and one injection well in Carbon County, all from their Foothills lease (8464):

The chart below shows total ECA production by month from these two wells. 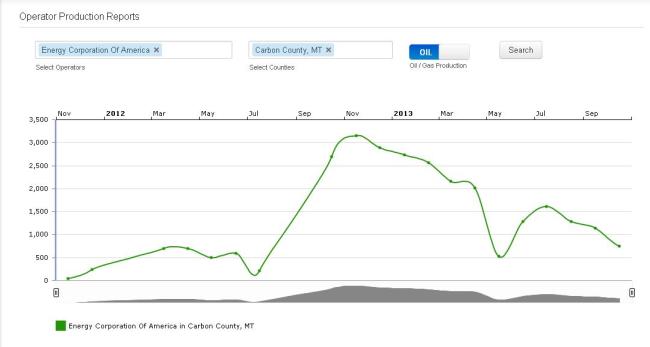 The map below shows the location of the two wells. The green marker represents the two producing wells, and the red marker is the waste water injection well. The pink markers are inactive wells.

ECA is clearly just ramping up their activities in Carbon County. We know they received an additional lease approval for a well near Belfry in December.

We can use this information to track their activities going forward.

At the request of a commenter below, I have expanded the map. The A marker on the map represents the McKay Ranch Airport, just east of the ECA wells. Absarokee is at center north, Stillwater River Road runs along the top, Red Lodge is in the bottom right, and Highway 78 is at the center. Click on the map to expand it.

The Moses family has lived on the Stillwater River since 1974, when George and Lucile Moses retired and moved to the Beehive from the Twin Cities. They’re gone now, but their four daughters (pictured at left, on the Beehive) and their families continue to spend time there, and have grown to love the area. This blog started as an email chain to keep the family informed about the threat of increased fracking activity in the area, but the desire to inform and get involved led to the creation of this blog.
View all posts by davidjkatz →
This entry was posted in Fracking Information. Bookmark the permalink.

6 Responses to Energy Corporation of America Activity in Carbon County