In previous posts we’ve looked at the tremendous increase in railway traffic involving crude oil over the last five years, the outmoded nature of tank car stock and the particular vulnerability of Columbus to increased railway traffic related to increased drilling along the Beartooth Front.

Today we have a positive development on this front.

The U.S. Department of Transportation (DOT) and the Association of American Railroads (AAR) have announced a rail safety initiative to institute new voluntary operating practices for moving crude oil by rail. These practices include: 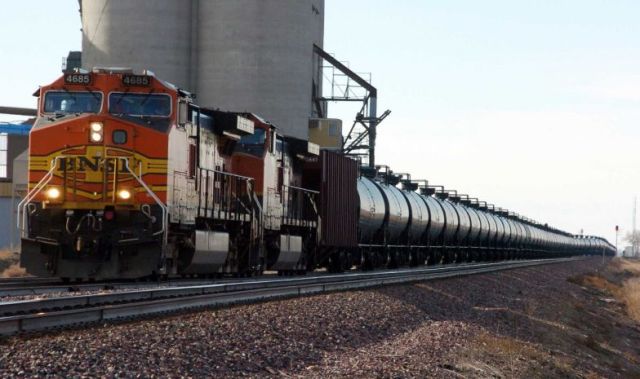 It’s important to note that this plan doesn’t include recommendations for two key areas that need to be addressed:

Both these issues are critical, since the oil being shipped from the Bakken, Marcellus and Eagle Ford is extremely volatile. It needs to handled correctly and shipped in cars designed to protect this flammable cargo. The agreement includes a plan for the DOT to work with their rail customers to address these issues. The sooner the better.

A step in the right direction to be sure, given the dramatic increase in railway oil shipments, but still more to be done. Watch this space for future developments.

Correction: A small but significant correction for those of you who get these posts via email. In my last post on the location of the recently-permitted Belfry well, I got the location slightly wrong. The actual location is here (marker A on the map), and it has been corrected in the post. The reason this is significant is that, as I am told by people who live in the area and as you can see when you look closely, the well is located in a drainage area, which makes it all the more hazardous. Thanks to sharp-eyed readers.

The Moses family has lived on the Stillwater River since 1974, when George and Lucile Moses retired and moved to the Beehive from the Twin Cities. They’re gone now, but their four daughters (pictured at left, on the Beehive) and their families continue to spend time there, and have grown to love the area. This blog started as an email chain to keep the family informed about the threat of increased fracking activity in the area, but the desire to inform and get involved led to the creation of this blog.
View all posts by davidjkatz →
This entry was posted in Bakken, Community Organization, Politics and History, Fracking Information and tagged Association of American Railroads, Bakken, breaking systems, community relations, crude oil classification, Department of Transportation, Eagle Ford, emergency response training, increased track inspections, lower speeds, Marcellus, railway safety, safety technology, tank car standards. Bookmark the permalink.