How a small town changed fracking in New York state, a powerful video

Dryden: The small town that changed the fracking game 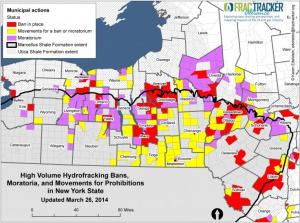 Status of bans/moratoria in New York      (click to enlarge)

Yesterday we told the personal story of Helen Slottje, who took on the oil and gas industry in New York, and whose work has led to local action to control fracking throughout the state. Today’s video shows the impact of Helen’s work in New York.

It’s a powerful video, in which real people talk about how drilling has affected them, their experience of fighting for their property rights, and their sense of empowerment at being able to control their own destiny.

I strongly recommend you take the 11 minutes to watch this. It shows what local communities can do when they unite to defend their rights and their way of life.

The Moses family has lived on the Stillwater River since 1974, when George and Lucile Moses retired and moved to the Beehive from the Twin Cities. They’re gone now, but their four daughters (pictured at left, on the Beehive) and their families continue to spend time there, and have grown to love the area. This blog started as an email chain to keep the family informed about the threat of increased fracking activity in the area, but the desire to inform and get involved led to the creation of this blog.
View all posts by davidjkatz →
Video | This entry was posted in Community Organization, Politics and History and tagged community action, Helen Slottje, moratorium, New York, video. Bookmark the permalink.

1 Response to How a small town changed fracking in New York state, a powerful video