Mayflies, wastewater and the health of our natural water sources

The life of the mayfly is one of nature’s amazing stories. They spend their first three years under water in the larval stage, and then emerge for a quick but eventful run as adults, with wings and reproductive organs but no way to ingest food, bite or sting. In the 24 hours or so they spend in adulthood, they become what one zoologist calls “little flying sex machines.” Their sole purpose is to reproduce. 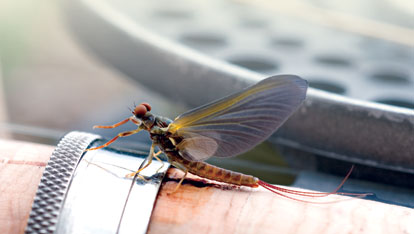 What does that have to do with oil and gas drilling?

Potentially a lot. A recent  study by the Stroud Water Research Center found that even highly-diluted levels of fracking wastewater, as low as 0.25% over a period of 20-30 days, could have a deadly effect on an insect known for its fragile beauty and long-considered a key indicator of stream health.

According to Senior Research Scientist John Jackson, who led the study, “Mayflies are a very reliable indicator of whether a stream is healthy or not healthy. When it comes to streams, we want to see vibrant communities of mayfly species there. So their conspicuous absence in a stream tells us something isn’t right. It’s not an environment where they are thriving.”

Key results of the study, which looked at mayflies, water fleas and fathead minnows:

The mayfly in Montana
Montana contains 109 species of mayflies. The scientific order name is Ephemeroptera, Greek for “brief adult life.” The French call the aquatic insects éphémères, or “one-day flies.” Montana Outdoors describes them as “looking like miniature angels when flying and, with their delicate upturned wings, tiny sailboats when floating on the water.” They are an essential part of the food chain that keeps our natural water vital.

The mayfly hatch begins in March each year with the blue winged olive mayfly, a creature so prolific that it hatches three times a year, continues throughout the summer, and closes in October.

This study is a reminder of how vulnerable our natural water is. Very low levels of contamination from fracking wastewater can kill off the mayflies and ruin the health of our streams and rivers. We need to take responsibility as a community to make sure our water is protected. We can’t expect anyone will do it for us.

I’ll leave you with this lovely scene from A River Runs Through It, in which the Craig Scheffer character says they’re biting on “Bunyan Bug Stonefly #2.” I can’t really tell the difference between mayflies and stoneflies. Perhaps you can.

The Moses family has lived on the Stillwater River since 1974, when George and Lucile Moses retired and moved to the Beehive from the Twin Cities. They’re gone now, but their four daughters (pictured at left, on the Beehive) and their families continue to spend time there, and have grown to love the area. This blog started as an email chain to keep the family informed about the threat of increased fracking activity in the area, but the desire to inform and get involved led to the creation of this blog.
View all posts by davidjkatz →
This entry was posted in Fracking Information and tagged fracking wastewater, mayflies, river health, water contamination. Bookmark the permalink.

1 Response to Mayflies, wastewater and the health of our natural water sources