What happens in other oil and gas states is often instructive for us in Montana. The oil and gas industry constantly works to develop new legislative, legal and business strategies to try to control drilling without interference from landowners. Strategies that are successful get exported to other states. States that are farther ahead in the shale revolution, where these strategies have already been used, can teach us about the ways of the industry and how it works to keep landowners in check, and how these strategies might be used here.

In Texas and Oklahoma, for example, we have seen successful legislative strategies to keep localities from having any say in the regulation of oil and gas drilling. We know that this is now a national strategy that the industry will try to implement elsewhere. In Montana and other states we have seen oil money from outside the state funneled in to try to pack the courts with pro-oil ideologues. In Pennsylvania, we have seen Energy Corporation of America successfully sued for systematically underpaying royalties to lease owners. 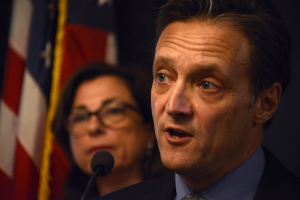 Rex Energy has proposed drilling six shale gas wells about a thousand yards from a local school. The three-member Middlesex zoning hearing board, all of whom have leased shale gas under their properties to drilling companies, approved new zoning rules in May that would allow these wells and open up more than 90 percent of Middlesex Township to shale gas drilling.

The lawsuit claims that appeals by drilling opponents, including the Delaware Riverkeeper Network and the Clean Air Council, both statewide environmental organizations, are “a sham” and “frivolous.” The plaintiffs seek punitive damages and costs totaling more than $500,000 for the alleged contractual interference and civil conspiracy.

Attorneys for the environmental groups have argued that the suit is a “SLAPP suit” — a strategic lawsuit against public participation — targeting individuals and groups for participating in public debate on government policies and the legal appeals of those policies.

SLAPP suits
According to Wikipedia:

“A strategic lawsuit against public participation (SLAPP) is a lawsuit that is intended to censor, intimidate, and silence critics by burdening them with the cost of a legal defense until they abandon their criticism or opposition.

“The typical SLAPP plaintiff does not normally expect to win the lawsuit. The plaintiff’s goals are accomplished if the defendant succumbs to fear, intimidation, mounting legal costs or simple exhaustion and abandons the criticism. In some cases, repeated frivolous litigation against a defendant may raise the cost of directors and officers liability insurance for that party, interfering with an organization’s ability to operate. A SLAPP may also intimidate others from participating in the debate. A SLAPP is often preceded by a legal threat. 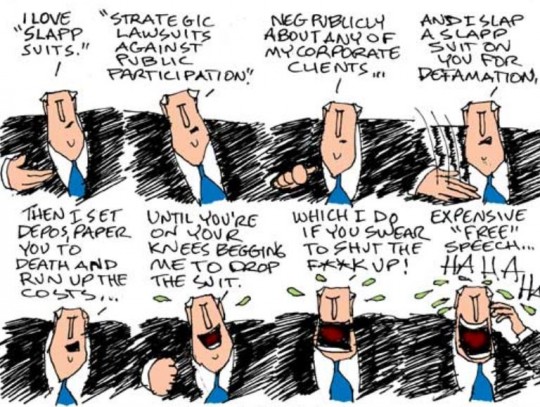 “There is a difficulty in that plaintiffs do not present themselves to the Court admitting that their intent is to censor, intimidate or silence their critics. Hence, the difficulty in drafting SLAPP legislation, and in applying it, is to craft an approach which affords an early termination to invalid abusive suits, without denying a legitimate day in court to valid good faith claims. Thus, anti-SLAPP laws target tactics used by SLAPP plaintiffs. Common anti-SLAPP laws include measures such as penalties for plaintiffs who file lawsuits ruled frivolous and special procedures where a defendant may ask a judge to consider that a lawsuit is a SLAPP (and usually subsequently dismiss the suit).”

There is no federal law against SLAPP suits, although 29 states have enacted anti-SLAPP laws. Montana is not one of them. Montana also doesn’t have any setback laws that would protect schools like the ones in Middlesex Township from winding up in the shadow of a well pad.

Update. Suit dismissed…for now
Since I started writing this post, plaintiffs’ lawsuit was dismissed for lack of specificity and for failure to associate various allegations with specific defendants. Although defendants’ attorneys are claiming that this is “a victory for the First Amendment and for the right of all Americans to speak their minds on important issues,” Plaintiffs were given 20 days to amend their complaint. (For those of you wanting to track this, the case is Dewey Homes & Investment Properties LLC et al. v. Delaware Riverkeeper Network et al., case number 15-10393, in the Butler County Court of Common Pleas.)

It could happen here
While there haven’t yet been any SLAPP suits relating to oil and gas development in Montana, it doesn’t take much imagination to realize it can happen here. Many of the elements that exist in Pennsylvania

The Moses family has lived on the Stillwater River since 1974, when George and Lucile Moses retired and moved to the Beehive from the Twin Cities. They’re gone now, but their four daughters (pictured at left, on the Beehive) and their families continue to spend time there, and have grown to love the area. This blog started as an email chain to keep the family informed about the threat of increased fracking activity in the area, but the desire to inform and get involved led to the creation of this blog.
View all posts by davidjkatz →
This entry was posted in Fracking Information and tagged Clean Air Council, Delaware Riverkeeper Network, Middlesex Township, SLAPP suits. Bookmark the permalink.