The Montana Farmers Union (MFU) has released a whitepaper addressing issues related to the use of fracking in oil and gas operations in Montana. Entitled “Fracking in Montana: Asking Questions, Finding Answers,” the paper outlines concerns of farmers, ranchers and landowners regarding fracking operations on or near their property. The paper also covers a variety of environmental issues, including water and air quality impacts. 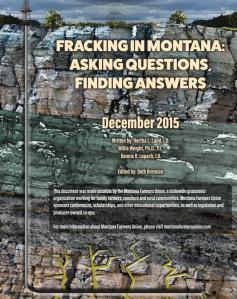 The paper was commissioned in 2014 by the Cooperative Education Corporation (CEC), a charitable affiliate of MFU. Authors include:

The paper was edited by Missoula lawyer Beth Brennan. You can download a copy by clicking on the graphic at right.

Lund presented an early draft of the paper in Absarokee last May at an event sponsored by local organizations.

MFU became interested in fracking when members began questioning how the procedure will impact their farms and ranches. “The effects of fracking on Montana agriculture is a subject worth exploring,” said MFU President Alan Merrill. “The end product of this collaboration is a great example of our commitment to education, and will provide members and the public with neutral and peer-reviewed information. Members can then make up their minds as to the role of fracking in Montana.”

MFU representative Chris Christiaens told KFBB-TV of Great Falls that farmers have concerns. “What we want to make sure doesn’t happen is some of the fluids or the waste that comes from an oil exploration doesn’t get just dumped down a coulee, that it is handled by good environmental standards.”

Key topics discussed in the whitepaper include water quantity and quality, produced water and fracking fluid, oil and gas regulation, seismic activity, emissions and air quality, local vs. state control, and answers to a variety of questions asked by farmers and ranchers.

The Moses family has lived on the Stillwater River since 1974, when George and Lucile Moses retired and moved to the Beehive from the Twin Cities. They’re gone now, but their four daughters (pictured at left, on the Beehive) and their families continue to spend time there, and have grown to love the area. This blog started as an email chain to keep the family informed about the threat of increased fracking activity in the area, but the desire to inform and get involved led to the creation of this blog.
View all posts by davidjkatz →
This entry was posted in Fracking Information and tagged Dennis Lopach, Fracking, Hertha Lund, Montana Farmers Union, Willis Weight. Bookmark the permalink.