If you thought Donald Trump was going to wave a magic wand and get the Keystone XL Pipeline built, you should recognize that there is no magic and the pipeline isn’t going to be constructed any time soon. 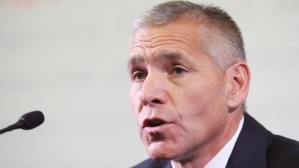 TransCanada Corp, the principal builder of Keystone XL, is still not prepared to offer a firm timeline for the completion of the Keystone XL pipeline, its top executive said last week, even though President Trump granted the project a permit.  According to TransCanada CEO Ross Girling, the pipeline sits in the company’s “long-term bucket” because of the remaining difficulty in getting it done. One of the key difficulties is the strong opposition of those concerned about the environmental impact of the pipeline.

“We’ve been at (the Keystone XL) for a long time, so it’s hard to say with any credibility that we’re going to get it done by a date,” Girling told the company’s annual general meeting last Friday. He said that the company will focus on current projects instead.

Background: Keystone XL Pipeline
The Keystone Pipeline System runs from the oil sands of Alberta to refineries in Nebraska, Illinois and Texas. It carries synthetic crude oil (syncrude) and diluted bitumen (dilbit) from the oil sands as well as light crude from the Bakken region in North Dakota and Montana. 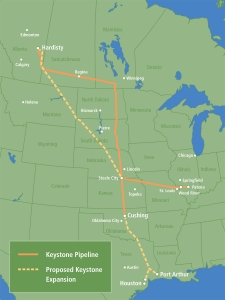 Three phases of the project are in operation and the fourth, the controversial Keystone XL, would deliver oil from Hardesty, Alberta to  Steele City, Nebraska, cutting directly through the Bakken area in Montana. The fourth phase was rejected by President Obama in 2015 after environmentalists argued it would spur the development of Alberta’s oil sands and worsen climate change.

President Trump’s January 24, 2017 order to permit the pipeline is not all that is required to get it built. The fight is far from over in Nebraska, the one state in its path that has yet to approve the project.

The pipeline must still be approved by the Nebraska Public Service Commission, which faces strong opposition from environmental groups and Native American tribes. They are concerned about the fragile Sandhills, and the Ogallala Aquifer, a huge groundwater supply. Despite general political approval in Nebraska, the activists have held off the Keystone XL to date through lawsuits, state and federal hearings, and the threat of protests patterned after those against the Dakota Access Pipeline showdown in North Dakota.

Public opposition has kept the Keystone XL from being built so far, and it will continue to stand in the way, despite whatever the current administration in Washington wants to do. TransCanada recognizes that it will take years to clear all the hurdles, and Trump’s order can be reversed by a subsequent US president, so the company is not willing to take unnecessary risk in committing to the pipeline.

What you can do: Write the Nebraska Public Service Commission. Take the time today.

The Moses family has lived on the Stillwater River since 1974, when George and Lucile Moses retired and moved to the Beehive from the Twin Cities. They’re gone now, but their four daughters (pictured at left, on the Beehive) and their families continue to spend time there, and have grown to love the area. This blog started as an email chain to keep the family informed about the threat of increased fracking activity in the area, but the desire to inform and get involved led to the creation of this blog.
View all posts by davidjkatz →
This entry was posted in Community Organization, Politics and History and tagged Keystone XL Pipeline, Nebraska Public Service Commission, Ross Girling, TransCanada. Bookmark the permalink.