Money is why Trump pulled out of the Paris Climate Agreement

President Trump announced today that the United States will withdraw from the 2015 Paris Agreement, a landmark agreement in which 195 countries, representing 95% of the world’s carbon emissions, agreed to voluntarily reduce emissions to control global warming. The US joins Syria and Nicaragua as the only three nations in the world not participating. Nice company.

It’s about money. This week 22 US Senators wrote the President asking him to pull out of the agreement. Implementing the agreement, the letter said, would create “burdensome regulations” that would hinder oil, gas, and coal exploration, and keep Trump from rescinding the Clean Power Plan.

And who  were these 22 Senators? Big recipients of contributions from the oil and coal industries, that’s who. Pulling out of Paris is a way for politicians who have been bought by fossil fuel industries to protect their sugar daddies.  The chart below was created from data at opensecrets.org, totalling donations from the 22 signatories in the 2012, 2014, and 2016 election cycles. 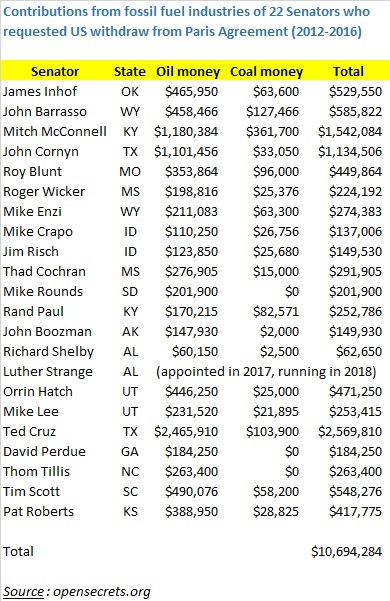 You have to wonder what these men will tell their grandchildren about the ultimate cost of choosing money over the environment.

You can tell them what you think at the ballot box in 2018 and beyond.

Related: From Washington to Helena, we subsidize the most profitable oil companies with billions of dollars of tax breaks and unnecessary subsidies

The Moses family has lived on the Stillwater River since 1974, when George and Lucile Moses retired and moved to the Beehive from the Twin Cities. They’re gone now, but their four daughters (pictured at left, on the Beehive) and their families continue to spend time there, and have grown to love the area. This blog started as an email chain to keep the family informed about the threat of increased fracking activity in the area, but the desire to inform and get involved led to the creation of this blog.
View all posts by davidjkatz →
This entry was posted in Climate change and tagged campaign contributions, climate change, Paris climate agreement. Bookmark the permalink.