The National Climate Report: Don’t be duped. Understand it yourself, and take action.

The Trump Administration released its National Climate Assessment (NCA) last Friday. This is the work product of the science agencies of our country, and reflects the best scientific thinking we have to offer on the impacts of climate change over the next several decades. Here are the findings in a nutshell:

The findings are completely consistent with the Montana Climate Assessment, the work of 32 Montana scientists from the public and private sector, published last year.

The Administration tried to bury the report by releasing it the day after Thanksgiving, and has since jumped on the climate denial bandwagon to minimize and discredit the outcome.

Donald Trump
It starts with the President saying he just doesn’t believe what the report has to say.

The report is science. It is not a matter of belief. No credible climate scientists dispute the findings of the report. As climate scientist Katharine Hayhoe says, “You can say, ‘I don’t believe in gravity,’ but if you step off a cliff you’re going down.” By using his bully pulpit to discredit the report without reason, the President is the main impediment to solving the problem.

This is simply not true. The report considered multiple scenarios, from one in which emissions are reduced to one where emissions continue to increase. And the notion that the modeling in the report is not data driven is ridiculous. From the report:

This argument makes no sense. The Climate Assessment agrees with research being done by the oil companies themselves.  And can you imagine how many millions lobbying groups would pay a top climate scientist to deny the findings of this report? Climate scientists were paid nothing to contribute to this report.

You need to inform yourself
What is glaringly obvious is that nobody representing the Administration disputed factually any of the scientific findings in the report. You can allow yourself to be duped by the Administration, or you can find out for yourself. Failure to act is exactly what will lead us to the most disastrous scenario.

The NCA is a congressionally-mandated report released at least every four years on what the past, present, and future of climate change means for the United States. The report is produced by 13 federal agencies comprising the U.S. Global Change Research Program, a presidential initiative started by President Ronald Reagan and mandated by Congress in the Global Change Research Act of 1990. It is the best work we have to offer.

Here’s where to download the report. Downloads are available in manageable pieces.

And here, courtesy of Climate Nexus, are the key findings of the report:

Topline findings of the report:

2. Economic losses from climate change are significant for some sectors of the U.S. economy. 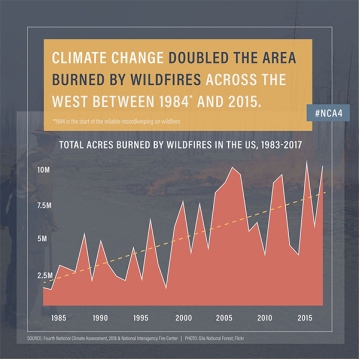 3. Americans are already responding to the climate change impacts of burning fossil fuels. 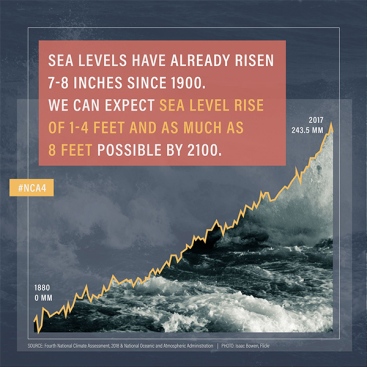 5. Every American’s health is at risk from climate change, with the elderly, young, working class and communities of color being particularly vulnerable.

6. We can do something about this. Transitioning from fossil fuels to renewable energy sources will reduce the risks of climate impacts.

The Moses family has lived on the Stillwater River since 1974, when George and Lucile Moses retired and moved to the Beehive from the Twin Cities. They’re gone now, but their four daughters (pictured at left, on the Beehive) and their families continue to spend time there, and have grown to love the area. This blog started as an email chain to keep the family informed about the threat of increased fracking activity in the area, but the desire to inform and get involved led to the creation of this blog.
View all posts by davidjkatz →
This entry was posted in Climate change and tagged climate change, National Climate Assessment. Bookmark the permalink.