This is a request for action from those of you in Stillwater County. The County is in the process of updating its growth plan, last updated in 2007. They have done a poor job of soliciting input from the public, and the current draft of the plan is inadequate in many respects. I write about oil and gas issues, an area that has received little attention in the draft, so I am asking you to comment on that.

COMMENTS ARE DUE NO LATER THAN THURSDAY, NOVEMBER 22, so please submit yours by then. Send by email to commission@stillwater.mt.gov.

The Beartooth Front is a unique area that is vulnerable to oil and gas drilling. A failure to plan jeopardizes its long-term health.

Growth planning in Montana
Growth planning is an essential element of county government in Montana. The comprehensive county growth plan was enshrined into law by the Legislature in 1999. While a growth plan does not have the force of law, it is an important document for shaping future policy. According to this law, the development of a growth plan is required to enact zoning.

Unlike in 2007, the County Commissioners have not been proactive in soliciting public comment. As a result they have received very little feedback, and so we have a chance to influence the plan by having an outsied voice about issues that are important to us.

You can view the 2018 draft growth plan by clicking here. The discussion regarding oil and gas development is mainly in Sections 4 and 5.

Here are the comments it would be helpful for you to make:

“Stillwater County currently has one citizen initiated zoning district on the West Fork of the Stillwater River (see map on page 5-2) and has received petitions and inquiries about creating other planning and zoning districts. This trend may continue in the absence of land use controls, so it may be beneficial for the County to begin evaluating regulatory options now to avoid addressing issues on a case-by-cases basis.”

Please ask the commissioners to delete this paragraph. In the entire history of Stillwater County, there have been three citizen initiated zoning petitions — one in 1979, one in 1998, and one in 2015 (the Beartooth Front petition). This is not a trend, and it is appropriate for individual areas of the county to develop their own zones when they have unique needs.

You may wish to comment on other areas of the plan. For your interest, here is a letter from local resident Burt Williams, who made wide ranging comments.

Inadequate community outreach
Here’s some background on how the Stillwater County Commissioners have not taken public feedback seriously. In 2007

they did. They sent direct mail surveys to over 3000 county residents, and they held 12 public meetings all over the county. County employees attended public events and handed out surveys, and there were notices published in local papers.

Their efforts yielded broad public input. The meetings were well attended, and they received 400 surveys back, getting valuable input on the issues that were important to residents. That return represented about 5% of county residents, which, as any marketer will tell you, is a strong response.

In 2018, there was no such earnest effort to solicit public input. Surveys were not mailed to residents, but were only placed online on the County’s web page. Notices were placed on organizational Facebook pages, but the social media outreach did not extend beyond organizational pages to social pages such as the Come Together Absarokee site, which has over 1700 members. There were only four community meetings — in Park City, Columbus, Reed Point, and Absarokee.

This lackluster effort could not be classified as outreach at all. A web-only strategy with no direct personal notifications only reaches a small number of people. How many of you went to the Growth Plan page on the Stillwater County web site during the summer? I didn’t think so.

The results were predictable. The County received only about 65 surveys from residents, a paltry return of less than 1% of residents. As an example, there were 22 survey responses from Nye in 2007; there were none in 2018.

Why this batch of commissioners is uninterested in engaging with the public is beyond my speculation at this point, but planning in Stillwater County is going to suffer unless you take this opportunity to raise your voice. 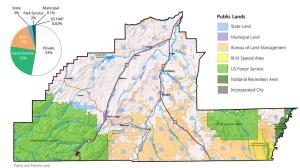 How it works in Carbon County
Neighboring Carbon County updated their growth plan in 2015, and their public outreach was a model for how residents can be engaged to develop a growth plan that serves the public rather than the county commissioners.

The County began by soliciting public input through an extensive road show, holding half-day meetings all over the county. They made a video of public input and made it available. There were ongoing discussions at well-attended planning board meetings.

The result was a comprehensive document, which you can view by clicking on the graphic above. Input on oil and gas development received during this process led to the establishment in 2016 of a zone that provided reasonable regulation on drilling, including a 750-foot minimum county-wide setback of wellheads from occupied dwellings (see p. 22). (Montana does not require setbacks from occupied dwellings.)

Please write the Stillwater commissioners by November 22 to make sure they hear what we have to say about planning.

The Moses family has lived on the Stillwater River since 1974, when George and Lucile Moses retired and moved to the Beehive from the Twin Cities. They’re gone now, but their four daughters (pictured at left, on the Beehive) and their families continue to spend time there, and have grown to love the area. This blog started as an email chain to keep the family informed about the threat of increased fracking activity in the area, but the desire to inform and get involved led to the creation of this blog.
View all posts by davidjkatz →
This entry was posted in Uncategorized and tagged County Growth Plan, Stillwater County Commissioners. Bookmark the permalink.