Largest oil and gas reserve in US discovered. It’s not the Christmas gift Ryan Zinke thinks it is.

Posted on December 7, 2018 by davidjkatz 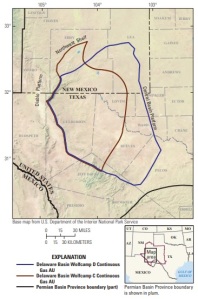 The reserve is called the Wolfcamp Shale and overlying Bone Spring Formation , and it is located in west Texas and southeast New Mexico.

By contrast, the Bakken formation in the Williston Basin of North Dakota will ultimately produce an estimated 7.4 billion barrels of oil according to a 2013 USGS estimate. Note the difference in estimates between what is “technically recoverable” in the Wolfcamp Shale and what will ultimately be produced in the Bakken. The Wolfcamp Shale may not actually produce 46 billion barrels of oil, but it is huge.

“Christmas came a few weeks early this year,” said U.S. Secretary of the Interior Ryan Zinke. “American strength flows from American energy, and as it turns out, we have a lot of American energy. Before this assessment came down, I was bullish on oil and gas production in the United States. Now, I know for a fact that American energy dominance is within our grasp as a nation.” 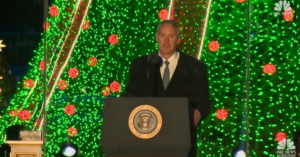 Zinke by the Christmas tree

Zinke’s reaction cuts to the heart of the critical challenge we face today. The announcement of this new reserve comes just two weeks after the release of the National Climate Assessment by the Trump Administration. This scientific assessment says we must act now to fight climate change or we face hundreds of billions of dollars in public health costs and a huge decline in our economy.

So we have one branch of the government telling us that it is a scientific fact that human-based climate change will cause huge damage if we don’t do something about it, and another branch jumping up and down by the Christmas tree like a kid who just got 46 billion barrels of candy and intends to eat it all before sundown.

Here’s the truth: we can’t take all that oil and gas out of the ground or we’re going to pay a far higher long-term price than the short-term financial benefit.

Ryan Zinke needs to be dragged away from his Christmas presents and replaced by a responsible adult who can balance the critical choices we have to face right now.

The Moses family has lived on the Stillwater River since 1974, when George and Lucile Moses retired and moved to the Beehive from the Twin Cities. They’re gone now, but their four daughters (pictured at left, on the Beehive) and their families continue to spend time there, and have grown to love the area. This blog started as an email chain to keep the family informed about the threat of increased fracking activity in the area, but the desire to inform and get involved led to the creation of this blog.
View all posts by davidjkatz →
This entry was posted in Climate change and tagged climate change, Ryan Zinke, Wolfcamp Shale. Bookmark the permalink.