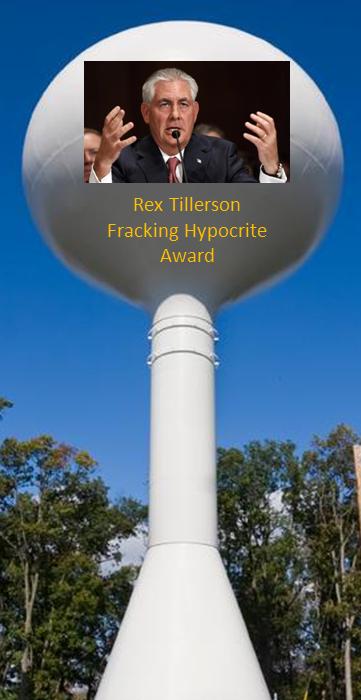 We here at Preserve the Beartooth Front are pleased to announce the first recipient of the Rex Tillerson Fracking Hypocrite Award. The Award is a 160-foot water tower, engraved with Rex Tillerson’s photo, delivered to the recipient’s front yard.

You remember Rex. He’s the CEO of Exxon who publicly complained that “dysfunctional regulation of hydraulic fracturing is holding back the American economic recovery, growth and global competitiveness,” and then joined with his neighbors in a lawsuit to block construction of a large water tower, used to support fracking operations, next to his Texas home.

McClendon earned riches and industry fame when, in 2008, he rescued Chesapeake from disaster. After extreme leverage, aggressive financing and plunging oil and gas prices had combined to crush Chesapeake shares by 80%, McClendon executed a series of deft maneuvers to not only pull the company from the brink of disaster, but elevate it to new heights.

How did he do it? According to ProPublica, McClendon raised nearly $5 billion by gouging rural landowners out of royalty payments they were supposed to receive in exchange for allowing the company to drill on their property.

The practice that McClendon invented has now become a common industry practice. In lawsuits in state after state, private landowners have won cases against oil and gas companies for stiffing them on royalties they were due. Federal investigators have repeatedly identified underpayments of royalties for drilling on federal lands, including a case in which Chesapeake was fined $765,000 for “knowing or willful submission of inaccurate information” last year.

Landowners paid for McClendon’s riches
The victims were landowners in Pennsylvania and elsewhere who leased their land to Chesapeake and saw their hopes of cashing in on the gas-drilling boom vanish without explanation.

“I got the check out of the mail… I saw what the gross was,” said Drake, a third-generation Pennsylvania farmer whose monthly royalty payments for the same amount of gas plummeted from $5,300 in July 2012 to $541 last February.  This sort of precipitous drop can reflect gyrations in the  price of gas. But in this case, Drake’s shrinking check resulted from a corporate decision by Chesapeake to radically reinterpret the terms of the deal it had struck to drill on his land. “If you or I did that we’d be in jail,” Drake said.

When energy companies lease land above the shale rock that contains natural gas, they typically agree to pay the owner the market price for any gas they find, minus certain expenses.

Federal rules limit the tolls that can be charged on inter-state pipelines to prevent gouging. But drilling companies like Chesapeake can levy any fees they want for moving gas through local pipelines, known in the industry as gathering lines, that link backwoods wells to the nation’s interstate pipelines. Property owners have no alternative but to pay up. There’s no other practical way to transport natural gas to market.

Chesapeake took full advantage of this. In a series of deals, it sold off the network of local pipelines it had built in Pennsylvania, Ohio, Louisiana, Texas and the Midwest to a newly formed company that had evolved out of Chesapeake itself, raising $4.76 billion in cash.

In exchange, Chesapeake promised the new company, Access Midstream, that it would send much of the gas it discovered for at least the next decade through those pipes. Chesapeake pledged to pay Access enough in fees to repay the $5 billion plus a 15 percent return on its pipelines.

That much profit was possible only if Access charged Chesapeake significantly more for its services. And that’s exactly what appears to have happened: While the precise details of Access’ pricing remains private, immediately after the transactions Access reported to the SEC that it collected more money to move each unit of gas, while Chesapeake reports that it also paid more to have that gas moved. Access said that gathering fees are its predominant source of income, and that Chesapeake accounts for 84 percent of the company’s business.

What’s more, SEC documents show, Chesapeake retained a stake in the gathering process. While Chesapeake collected fees from landowners like Drake to cover the costs of what it paid Access to move the gas, Access in turn paid Chesapeake for equipment it used to complete that process, circulating at least a portion of the money back to Chesapeake.

Lessons for Montanans
Once again, congratulations to Aubrey McClendon on his stunning achievement. Others have learned from his double dealing, and it could happen here. Things you should be doing:

Oil and gas companies are in business for one reason: to make money. Be warned. McClendon just raised $2.2 billion to start a company that will drill on the Utica Shale. He may be here next.

The Moses family has lived on the Stillwater River since 1974, when George and Lucile Moses retired and moved to the Beehive from the Twin Cities. They’re gone now, but their four daughters (pictured at left, on the Beehive) and their families continue to spend time there, and have grown to love the area. This blog started as an email chain to keep the family informed about the threat of increased fracking activity in the area, but the desire to inform and get involved led to the creation of this blog.
View all posts by davidjkatz →
This entry was posted in Fracking Information and tagged Aubrey McClendon, Chesapeake Oil, gouging, Mineral rights, monopoly, oil pipelines, Pennsylvania, Rex Tillerson Fracking Hypocrite Award, royalties, surface use agreement. Bookmark the permalink.