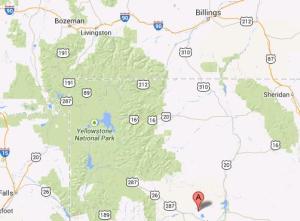 The town of Pavillion, Wyoming is in many ways unremarkable. It sits southeast of Yellowstone Park, just 200 miles due south of Red Lodge. The 2010 census puts its population at 231 in 95 households.

But Pavillion sits at the center of a controversy that threatens the future of the hydraulic fracturing industry. At least 32 of those households, including John Fenton‘s, have been forced to get their water not from their wells, but from free plastic cistern tanks provided by the state of Wyoming, using a grant from the oil company Encana. The cisterns are required because their aquifer is contaminated by chemicals associated with oil and gas drilling.

1990s: Extensive natural gas drilling began in the area. Starting at about the same time, residents began to complain of physical ailments and said their drinking water was black and tasted of chemicals.

2008: EPA begins to study drinking water in Pavillion with the aim of determining whether the water is safe to drink.

January 2010: The EPA conducted four rounds of sampling, first testing the water from more than 40 homes and later drilling two deep wells to test water from layers of earth that chemicals from farming and old oil and gas waste pits were unlikely to reach.

November 2011: EPA releases the latest data from its monitoring wells in Pavillion at a public meeting. Officials say they will prepare a report on their findings.

December 2011: EPA releases a draft report with analysis of its ground water investigation in Pavillion, Wyoming. According to the report:

EPA’s analysis of samples taken from the Agency’s deep monitoring wells in the aquifer indicates detection of synthetic chemicals, like glycols and alcohols consistent with gas production and hydraulic fracturing fluids, benzene concentrations well above Safe Drinking Water Act standards and high methane levels. Given the area’s complex geology and the proximity of drinking water wells to ground water contamination, EPA is concerned about the movement of contaminants within the aquifer and the safety of drinking water wells over time.

December, 2011: Wyoming Governor Matt Mead sends a letter to the EPA, calling on the agency to conduct more testing to determine if there is a link between natural gas development and groundwater contamination.  In doing so, he called for cooperative approach between state and federal government investigators but also criticizes the EPA for releasing findings before the peer review process is completed.

March 2012: EPA and the state of Wyoming agree to conduct further tests in Pavillion in an effort to end disputes between over the findings in the December report. The two entities announce that two more rounds of testing will be conducted at monitoring wells that were installed in 2010. The peer-review process for the initial report is also put on hold.

December 2011 – June 2013: EPA comes under attack for their testing methods at Pavillion and becomes concerned that their results would not hold up under peer review.  Following public hearings and analysis by other government agencies, the EPA is accused of making some of the same drilling mistakes that they were trying to prevent in industry.

For example, according to the Wyoming Department of Environmental Quality (DEQ), the EPA did not case their monitoring wells correctly.  According to the DEQ, EPA drillers, in a contradiction of their own regulatory requirements, did not line their two deep test wells with stainless steel casing Because the casing was carbon steel rather than stainless steel, it was susceptible to corrosion and thereby to affecting the chemical content of groundwater and fluids in the well.

June 2013: The EPA announces it will not make a final report on their findings in Pavillion and says it will turn responsibility for the report over to the state of Wyoming. Wyoming announces that it will accept a $1.5 million grant from Encana Corporation to fund the study. Encana has taken a clear position that the EPA study is invalid.

September 2013: Idaho Dept. of Lands Oil and Gas Program Manager Bobby Johnson, who formerly worked for the groundwater division of the Wyoming State Engineer’s Office, which has taken the lead role in the Pavillion contamination investigation, says in a public meeting that the hydraulic fracturing industry is responsible for the contamination in Pavillion, He pointed to a faulty cement casing in a natural gas well as a key factor in the case, describing EPA data showing pollution was caused “by a bad cement job on an Encana well that was drilled in 1985.”

February 2014: Johnson recants his comments after a conversation with Grant Black, Wyoming Oil and Gas Conservation Commission supervisor, convinced him he was “dead incorrect” to attribute pollution to industry.  As John Fenton of Pavillion put it, “It appears that the state has already reached conclusions about the investigation of Pavillion area groundwater contamination before they’ve released findings or even hired experts to review their analysis.”

The final report on the cause of the Pavillion contamination is due out later this year.

Politics: incompatible with science
What a mess. There is truth at the bottom of the wells in Pavillion, but, in a familiar refrain these days, politics has created a roadblock that prevents it from coming out.

There’s plenty of blame to go around. The EPA did a thorough study, but made critical errors. But science has a way of dealing with this. It’s called peer review. Staying the course on peer review would have revealed what in the report was correct and what was flawed, and charted a course for continued scientific study.

This is par for the course for the EPA. Over the past two years the agency has backed away from taking any position that will make a definitive assessment of the dangers of fracking:

The state of Wyoming has given up any semblance of credibility for taking money to fund their study of Pavillion from the company that is accused of polluting it. What were they thinking? They can argue as long as they want that Encana has no involvement in the study. Financial relationships remove impartiality. And having a member of the Board of Oil and Gas take Bobby Johnson aside to correct his perception about the cause of the pollution is a joke. No matter how thorough their ultimate report is, the outcome will get lost in political controversy.

There is truth in the EPA report. You just need to look for it.
What’s sad here is that a good portion of the truth lies in the EPA data, but it has been obscured by attacks on their methodology. In addition to its disputed deep water testing, the study also found pollution of shallow groundwater with oil and gas compounds near wastewater disposal pits1.

According to all current reports, these results are based on reliable test methods and indicate a need for safer and more effective waste disposal methods by drilling companies. Futhermore, both the well casings and local geology made for risky drilling.  Logs and completion reports for local wells showed sporadic bonding in intervals of casing.  Casings were also extremely shallow, with some extending as little as 110 meters underground—actually shallower than some local domestic wells.

The victims in this political debacle are not only the residents of Pavillion, who have been permanently injured by the failure to get at the truth, but also the residents of other communities who won’t have the benefit of a clear understanding of what happened in Pavillion so that they can benefit from those lessons.

The Lesson for Montanans
Here’s the important thing to understand for residents of Carbon and Stillwater counties: the lack of government protection that has caused the innocent victims in Pavillion to wind up drinking their water out of cisterns instead of wells is the same in Montana as it is in Wyoming.

When contamination occurs, we won’t get help from the EPA. The Montana Board of Oil and Gas Conservation has clearly demonstrated that it represents corporations, not the people of Montana, so there will not likely be any help in the permitting process.

If the area along the Beartooth Front is going to be protected from water contamination, from air pollution, from devaluation of the land, the local community is going to have to look out for itself.

The Moses family has lived on the Stillwater River since 1974, when George and Lucile Moses retired and moved to the Beehive from the Twin Cities. They’re gone now, but their four daughters (pictured at left, on the Beehive) and their families continue to spend time there, and have grown to love the area. This blog started as an email chain to keep the family informed about the threat of increased fracking activity in the area, but the desire to inform and get involved led to the creation of this blog.
View all posts by davidjkatz →
This entry was posted in Community Organization, Politics and History, Fracking Information and tagged Environmental Protection Agency, John Fenton, Pavillion, water contamination, Wyoming. Bookmark the permalink.