For over a decade, oil and gas executives and the policy makers who support them have repeated a single bold claim: there has never been a single documented case where fracking contaminated groundwater. Well, if you repeat a lie often enough you can hope that it becomes the truth, but in the case of fracking the facts are impossible to ignore, and they tell a very different story. 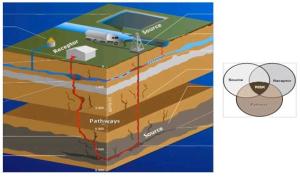 Proving contamination requires knowing the source of the water, the pathway it has taken, and where it was received. (click to enlarge)

As with many lies, there’s a kernel of truth inside. What the oil and gas execs are doing is telling a very narrow story. We’ve discussed it before — if you define contamination narrowly and after the fact, it’s a very difficult thing to prove. The scientific standard is burdensome, and it’s often hard to reconstruct exactly how contamination occurred. Proving contamination requires knowing the source of the water, the pathway it has taken, and where it was received. And then there’s politics, which often gets in the way of any rational discussion. In Pavillion, Wyoming, for example, local residents have had their water supply permanently contaminated, and they’re left in limbo while politicians argue over a variety of extraneous matters.

But in many ways this discussion is extraneous. Water gets contaminated in a number of ways during the fracking process, and there are many, many examples of this happening. You can’t define away the problem. It’s real. It happens, and it destroys not only water supplies, but people’s lives.

Four ways hydraulic fracturing can cause water contamination
Now we have a new study that shows that risks to water resources from hydraulic fracturing through four major routes, according to Duke scientists Avner Vengosh, Robert Jackson and colleagues at Duke University. The study was published in the journal Environmental Science and Technology last month, and is a review of the scientists’ existing research.

The study found that water contamination due to oil and gas drilling can occur in four primary ways:

According to EnergyWire (July 10, 2012, subscription required), other studies have challenged the Duke findings, saying  migration might have been naturally occurring if the topography of the region allowed it. But the Duke scientists showed statistically that topography could not be the only reason to have contamination in northeastern Pennsylvania.

Let’s deal with it
As with many other issues, it’s time to stop using science to create a political wedge against responsible behavior. We need to accept that fracking causing environmental harm, and develop policy accordingly.

The Moses family has lived on the Stillwater River since 1974, when George and Lucile Moses retired and moved to the Beehive from the Twin Cities. They’re gone now, but their four daughters (pictured at left, on the Beehive) and their families continue to spend time there, and have grown to love the area. This blog started as an email chain to keep the family informed about the threat of increased fracking activity in the area, but the desire to inform and get involved led to the creation of this blog.
View all posts by davidjkatz →
This entry was posted in Fracking Information and tagged aquifers, Fracking, hydraulic fracturing, methane, shale gas drilling, wastewater, water contamination. Bookmark the permalink.