Posted on September 2, 2014 by davidjkatz

Here’s a rare opportunity to hear from the horse’s mouth what’s going on with oil drilling along the Beartooth Front.

Energy Corporation of America (ECA) is on the agenda for the Carbon County Commission meeting on Monday, September 8 at 10:00 am. The Commission agenda item describes their presentation as a “Carbon County/Beartooth Front Plan Brief.”

The meeting will be held in the Carbon County Commissioners Hearing Room at 17 West 11th Street in Red Lodge. 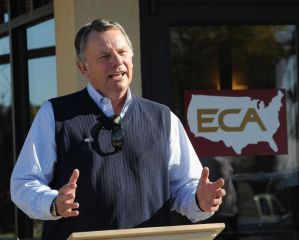 John Mork, CEO of ECA, promised to “bring the Bakken to the Beartooths.” Photo by Larry Mayer, Billings Gazette

ECA is the Denver-based operator that announced last fall a plan to “bring the Bakken to the Beartooths” and drill 50 wells in the area. The first of those wells, near Belfry, was permitted by the Montana Board of Oil and Gas Conservation (BOGC) earlier this year, and is currently being evaluated for fracking.

The well sparked considerable controversy in June when local residents caught an ECA vendor taking water from a local gravel pit without a water right and the Montana Department of Natural Resources had them shut down.

You can read a history of ECA involvement with this well here.

ECA has a reputation for being a serial polluter in states where they have operated in the past. In Pennsylvania alone, according to the State Department of Environmental Protection, ECA has had 66 state inspections with violations, 90 separate violations, 55 enforcement actions and fines of over $80,000 (read the actual report here). The company has been cited for 70 more violations in West Virginia.  Pennsylvania recently released a list of 243 wells that have been contaminated by oil and gas operations. It is not yet known how many of these wells were contaminated by ECA.

Concerns about ECA and their plans to drill in Belfry led local residents to form the Silvertip Zone, a citizen-initiated special district that would develop, through a planning and zoning committee, special rules requiring ECA and other operators to adhere to highest and best management practices in conducting drilling operations.

This will be a rare public appearance by ECA, which has ignored American Petroleum Institute “good neighbor” standards, and has not interacted with local residents. The company has been publicly secretive about its plans for Carbon and Stillwater Counties.

We’ll provide information about the format of the meeting when we have it, but it’s important for residents of Carbon and Stillwater Counties to come out to show public concern for the damage that unregulated drilling will cause. Get your questions prepared and come on out. It’s an opportunity to show your support for the residents of Belfry and hear for yourself what ECA is willing to tell us about their plans.

The Moses family has lived on the Stillwater River since 1974, when George and Lucile Moses retired and moved to the Beehive from the Twin Cities. They’re gone now, but their four daughters (pictured at left, on the Beehive) and their families continue to spend time there, and have grown to love the area. This blog started as an email chain to keep the family informed about the threat of increased fracking activity in the area, but the desire to inform and get involved led to the creation of this blog.
View all posts by davidjkatz →
This entry was posted in Community Organization. Bookmark the permalink.