Great news today from the Northern Plains Resource Council (NPRC). Water stealing from the gravel pit at the well site in Belfry has been stopped by the Montana Department of Natural Resources and Conservation (DNRC). The agency has informed the landowner that he does not have the right to sell this water to ECA.

There have been a number of dramatic developments in this story today. This morning ECA issued this statement, reported by Ed Kemmick on Last Best News.

“Energy Corporation of America (ECA) is working with a local vendor to purchase water for our operations.  It is our understanding that this particular vendor has an agreement directly with a surface owner in the area who has a gravel pit on his property that has filled with water.  Under their agreement, the vendor draws water from this gravel pit, which he then transports and ultimately sells to ECA.

“It is important to note that the location in question is simply a gravel pit that has filled with water.  There are no surface streams or other water sources running into or out of the gravel pit.

“We have discussed this situation with our counsel and he has advised us that we have taken all necessary steps to appropriately and lawfully utilize the water being drawn from the gravel pit.  Therefore, we believe we are in full accordance with the law and, as we strive to with all of our operations, we are operating responsibly — utilizing local vendors and working hard to be a good neighbor.” 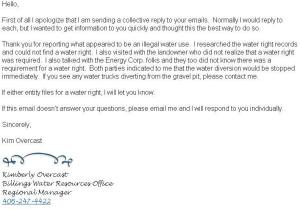 Then, according to NPRC, the DNRC called ECA and told them the water was from an illegal source, and they couldn’t legally use it.  ECA rep Seth Nolte asked the DNRC, “Well then what are we supposed to do?” and DNRC told them they could either drill their own small well or get it from the townships.

Great news. Local neighbors set this process in motion when they spotted the violation, photographed it, and brought it to the attention of the DNRC. Thanks to Northern Plains members, readers of this blog and the Facebook page No Fracking the Beartooth Front, the DNRC was deluged with calls and emails. Based on click-throughs on this site, at least 26 people emailed the DNRC, and many more people on the Facebook page indicated they had called or mailed.

The Moses family has lived on the Stillwater River since 1974, when George and Lucile Moses retired and moved to the Beehive from the Twin Cities. They’re gone now, but their four daughters (pictured at left, on the Beehive) and their families continue to spend time there, and have grown to love the area. This blog started as an email chain to keep the family informed about the threat of increased fracking activity in the area, but the desire to inform and get involved led to the creation of this blog.
View all posts by davidjkatz →
This entry was posted in Community Organization, Politics and History and tagged action, Belfry well, Montana Department of Natural Resources and Conservation, Northern Plains Resource Council. Bookmark the permalink.