Posted on September 2, 2014 by davidjkatz

The Local Rag, a free monthly publication distributed in south central Carbon County, recently published a rather curious pro and con on fracking. It’s worth mentioning because it highlights the tricks that pro-drilling advocates use everywhere to advance their cause.

The article is split into three parts:

Read all three, but I’m going to focus on the last section of the article here because it provides so many examples of the depths to which pro-drillers will stoop to make their arguments.

The basic premise of the pro-fracking piece is that “(o)pponents of fracking use a time-tested strategy for spreading propaganda; it’s called FUD, and it stands for Fear, Uncertainty, and Doubt. They realize that most Montanans have no idea what fracking actually is, so they have orchestrated a campaign of misinformation.”

After insulting the intelligence of most Montanans, the author, whoever he or she is, then proceeds to try to debunk this alleged FUD without offering a single fact to do so.

Here are some examples of the lies, half-truths and outright stupidity in the article:

“I am not aware of any proven case where the fracking process itself (bold added) has affected water, although there are investigations ongoing.” 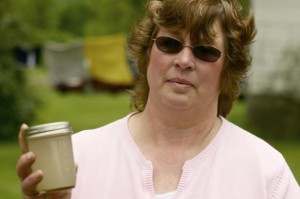 Carol French displays her contaminated drinking water. Click to get a better view of how discolored it is

We dealt with this one yesterday, but it’s worth touching on it again. It is very difficult to prove that the fracking process itself causes contamination, as explained here. But there are many, many documented cases of water contamination for fracked wells. You can find a list of 243 of them in Pennsylvania here.

If you’re really interested in reading scientific, peer-reviewed studies that document water contamination due to fracking, you can read 59 of them here (For those of you keeping score, note that scientific and peer-reviewed specifically means Not FUD.) Or, better yet, ask John Fenton. Or Carol French. Or Deb Thomas. Or Steve and Jacki Schilke. Or Terry and Teresa Jackson. Or Marilyn Hunt. Or Christine Pepper. Or Linda Monson. Or Diana Daunheimer. Or Laura Amos. Or the late Terry Greenwood.

There’s plenty of blame to go around on this. Expanded oil drilling along the Beartooth Front is an important issue that deserves to be debated in a public forum. We should all appreciate that The Local Rag took responsibility for doing this. But shame on them for failing to find a credible fracking proponent to advance that argument (or maybe there isn’t one). Shame on the author for not having the guts to sign his or her name to the article. And shame on the oil and gas industry for constantly accusing their opponents of putting forward FUD when they’re the ones who consistently lie and twist the facts.

Part of the purpose of this blog is to make arguments based on facts, which I try to link to. You can disagree with the conclusions I make, but, as the late Senator Daniel Patrick Moynihan once said, “Everyone is entitled to his own opinion, but not his own set of facts.”

How water contamination can occur. Click to enlarge. Source: The Checks and Balances Project

The Moses family has lived on the Stillwater River since 1974, when George and Lucile Moses retired and moved to the Beehive from the Twin Cities. They’re gone now, but their four daughters (pictured at left, on the Beehive) and their families continue to spend time there, and have grown to love the area. This blog started as an email chain to keep the family informed about the threat of increased fracking activity in the area, but the desire to inform and get involved led to the creation of this blog.
View all posts by davidjkatz →
This entry was posted in Fracking Information and tagged Al Bloomer, Carbon County, Deb Muth, earthquakes, Fear undertainty and doubt, fracking wastewater, FUD, pro-fracking, Red Lodge, The Local Rag, water contamination. Bookmark the permalink.