Event this Saturday in Sheridan, WY: Energy and Censorship

Yesterday’s Laramie Boomerang brings news of an event this Saturday in Sheridan with the provocative title “Living Behind the Carbon Curtain: Wyoming, Energy and Censorship.” The speaker will be University of Wyoming professor Jeff Lockwood. 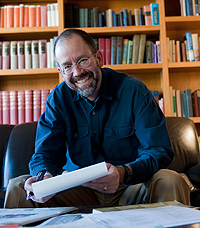 Lockwood is working on a book with the same title for 2016 publication.  “I’m digging into the ways in which the energy industry has colluded with the government in both Wyoming and nationally — as well as internationally,” Lockwood said, “to shape public discourse, and in some cases to explicitly censor free speech, particularly forms of speech the industry finds inconsistent with its interests.”

The book highlights five examples of such censorship that have taken place in Wyoming, he said. His talk this weekend will focus on two chapters and one example, about the cancellation of an art show. 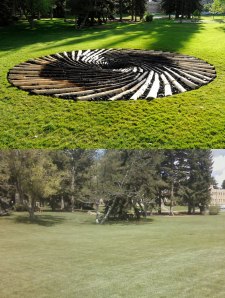 The artwork Carbon Sink, before (top) and after removal. Click to enlarge

“Art work was censored from the Nicolaysen Art Museum in Casper because it was deemed offensive to the energy industry,” Lockwood said.

Lockwood wrote a controversial online piece on the removal of the artwork, entitled Carbon Sink, in which he described why this happened:

Given the extraordinary generosity of the legislature to UW, the institution is indebted to the politicians who are, in turn, beholden to the energy industry. Even though the piece was as much about individual responsibility as corporate accountability, legislators from energy-rich counties were unhappy with Carbon Sink. The declining demand for coal and the falling prices for natural gas made a fossil-fueled state government grumpy. Commonsense, experience with the Wyoming Way, and conversations with legislators leaves little doubt that the university administration traded free speech for political pacification (“extortion” is such an ugly word).

The University of Wyoming has denied the allegations.

Censorship a relevant topic for Montanans
The topic of censorship is an interesting one for Montanans who live along the Beartooth Front. We have seen it occur in various ways. Land owners in Carbon County had to go to court to be able to testify on a well permit before the Montana Board of Oil and Gas Conservation (BOGC), and at recent hearings the BOGC heard from citizens about its lack of transparency.

It is a topic we should be aggressive in pursuing. The BOGC, which is responsible for regulating oil and gas in Montana, is, by its very structure, an organization designed to promote the drilling of wells for profit.

The public is invited to attend the event, which is part of the annual meeting of the Powder River Basin Resource Council.

The event will be at the Sheridan Holiday Inn at 7:30pm. Sheridan is about a two-hour drive from Billings.

The Moses family has lived on the Stillwater River since 1974, when George and Lucile Moses retired and moved to the Beehive from the Twin Cities. They’re gone now, but their four daughters (pictured at left, on the Beehive) and their families continue to spend time there, and have grown to love the area. This blog started as an email chain to keep the family informed about the threat of increased fracking activity in the area, but the desire to inform and get involved led to the creation of this blog.
View all posts by davidjkatz →
This entry was posted in Community Organization, Politics and History and tagged Carbon Sink, censorship, Jeff Lockwood, Powder River Resource Council, Sheridan Wyoming, University of Wyoming. Bookmark the permalink.

2 Responses to Event this Saturday in Sheridan, WY: Energy and Censorship