The Poplar Pipeline spill
Last Saturday’s massive pipeline break and oil spill in the Poplar Pipeline near Glendive is a disaster that has leaked carcinogens into the Yellowstone River and left Glendive’s residents without water. It is another in a long list of recent oil leaks and spills that endanger our way of life.

The line was carrying Bakken crude oil at the time of the spill. According to Bridger Pipeline LLC, the owner of the pipeline, an estimated 40,000 gallons have been released.

The city of Glendive draws its public drinking water supply from an intake structure about 14 feet under the surface of the Yellowstone River seven miles downstream from the Poplar Line release. Testing of the Glendive water indicates the presence of volatile organic compounds (VOCs), specifically benzene, and residents have been put on alert to not use the water for cooking.

Product sheen has been observed on the river almost to Sidney, and oil has been seen as far downstream as Williston. 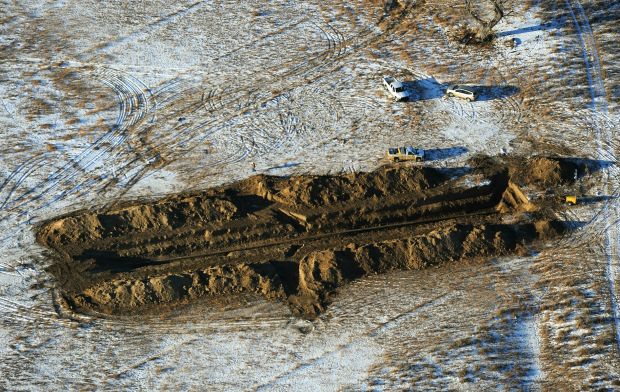 This is not the first spill from a pipeline owned by Bridger Pipeline LLC. In recent years, a pipeline called the Parshall Gathering System has leaked 125 barrels, or about 5,250 gallons, just south of Stanley, N.D., according to incident reports filed with the North Dakota state health department. Stanley is located between Williston and Minot. 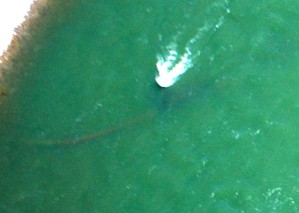 In July, 2011, ExxonMobil’s Silvertip pipeline, buried just below the Yellowstone River, was torn apart by debris flowing down the flooded river near Laurel. The pipe broke in two and pumped 1,509 barrels of oil — more than 63,000 gallons —  into the river before the flow was shut off, 200 miles upstream from where this week’s spill occurred. The result was miles of oil-soaked shoreline, acres of oil-smeared crops and oil rings painted on everything from trees to birds’ bellies to houses.

The spill required a $135 million cleanup, and resulted in $1.6 million in state fines for Exxon and a pending lawsuit against the company by a group of landowners affected by the spill.

The Silvertip Pipeline begins in Elk Basin, just above the site of the Hunts Creek well in Belfry.

In August of last year, a breach in a tailings pond from an open-pit copper and gold mine sent 1.3 billion gallons of slurry gushing into a creek in British Columbia. The slurry contained chemicals such as arsenic, mercury, and sulfur, and left hundreds of people without water. You can see the breech in the video below.

In January, 2014, 7500 gallons of liquid containing chemical foam and glycol ethers leaked from a tank into the ground near the Elk River in West Virginia, leaving 300,000 people in the Charleston area without potable water. The chemical spill was the third chemical accident to occur in the Kanawha River Valley within the last five years, and on June 12, 2014, another spill of containment water occurred at the same site.

Who can forget the spectacle of this Freedom Industries executive drinking bottled water while the people of Charleston had no water at all? 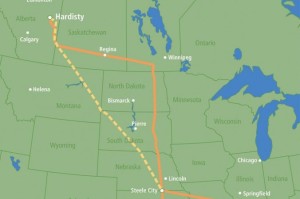 The Keystone XL Pipeline would cross the Yellowstone and Missouri Rivers. Click to enlarge.

Next stop: Keystone XL
And, of course, Montana’s senators just cast votes in favor of the Keystone XL Pipeline. “The State Department has affirmed the safety of Keystone XL pipeline,” said Steve Daines, who was joined in his support by Jon Tester. “It’s important that this job-creating project is approved.”

Keystone XL would cross the Yellowstone about 20 miles upstream from the current spill.

What Daines and Tester didn’t say is that many of the jobs might be created in the bottled water industry and in oil cleanup crews.

The agency’s Office of Pipeline Safety has roughly 150 inspectors overseeing 2.6 million miles of gas, oil and other pipelines.

That number is slated to increase by another 100 inspectors under a $27 million budget increase approved last year. That would still leave inspectors stretched way too thin given the mileage of pipelines.

Jeff Farrells, 62, the executive director of the Pipeline Association for Public Awareness, said that while new pipelines are safer than old ones, they are far from infallible. “Nothing’s perfect. I wish it was,” he said. “Is it worth the risk? The answer to that question in the past in this country has always been yes.”

What it means for us
The answer shouldn’t be an automatic, “Yes.” The question of whether it is “worth the risk” is a decision we need to make in a thoughtful way that doesn’t pit economic growth against the rights of citizens.

Senators Tester and Daines should know better. To vote for the Keystone XL without adequately addressing the issue of pipeline safety is irresponsible. Calling the Keystone a job creator and at the same time jeopardizing the health, safety and way of life of Montana residents is not leadership.

Along the Beartooth Front we need to keep fighting for landowner rights, for the protection of health and livelihood, and for the longtime viability of our community. It’s a long-term fight involving local regulation, reform in Helena, and responsible federal legislation.

The Moses family has lived on the Stillwater River since 1974, when George and Lucile Moses retired and moved to the Beehive from the Twin Cities. They’re gone now, but their four daughters (pictured at left, on the Beehive) and their families continue to spend time there, and have grown to love the area. This blog started as an email chain to keep the family informed about the threat of increased fracking activity in the area, but the desire to inform and get involved led to the creation of this blog.
View all posts by davidjkatz →
This entry was posted in Fracking informaation and tagged Bridger Pipeline LLC, Keystone XL, oil spill, Poplar Pipeline, Silvertip Pipeline, Yellowstone River. Bookmark the permalink.