The Yellowstone River closing: this is what climate change looks like

Click to read the FWP release on the closure.

A microscopic parasite is destroying the fish population of the Yellowstone River system, causing Montana Fish, Wildlife and Parks (FWP) to take the extraordinary step of closing a 183-mile stretch of the Yellowstone and its tributaries to all water-based recreation (fishing, wading, floating, tubing, boating). The closure affects the river from Gardiner, at the north end of Yellowstone Park, to Laurel, and includes the Stillwater, Boulder, and Shields rivers.

In the past 10 days, FWP has discovered over 2000 dead mountain whitefish along this stretch of river, and expects that the total kill will climb to the “tens of thousands.” According to FWP, the kill is beginning to impact some rainbow and Yellowstone cutthroat trout.

The parasite is tetracapsuloides bryosalmonae, which causes proliferative kidney disease (PKD) in salmonids, one of the most serious diseases to impact whitefish and trout. According to FWP, the disease can be 20-100% fatal in trout.

The closure will have a dramatic impact on Montana’s outdoor recreation economy, which is responsible for more than 64,000 jobs and nearly $6 billion in yearly economic activity. In stressing the urgency of the situation, Governor Bullock stated, “We must be guided by science. Our state cannot afford this infectious disease to spread to other streams and rivers and it’s my responsibility to do everything we can to stop this threat in its tracks and protect Montana jobs and livelihoods.”

FWP will continue to monitor the river and will lift the closure when stream conditions such as flow and temperature improve and fish mortality ceases. 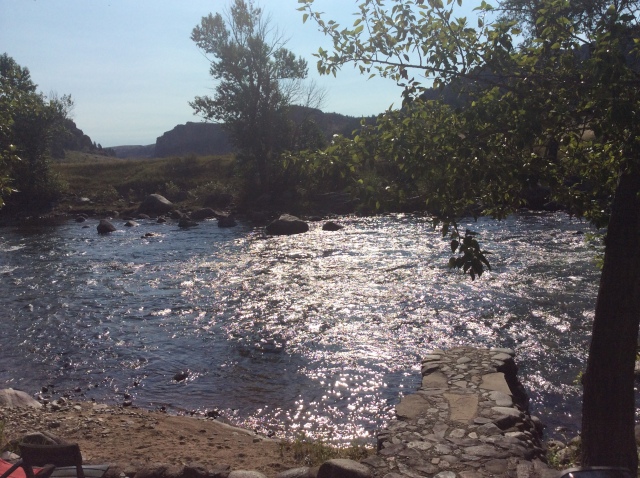 The Stillwater is at an extremely low level, as you can see in this photo taken from our deck.

This is what climate change looks like
The parasite is native to the northern US, Canada and Europe, but outbreaks have not been common. According to FWP, there have been only two isolated PKD outbreaks in Montana in the last 20 years.

Why such a huge outbreak, and why now?

According to the FWP release, the effect of the disease on Yellowstone’s fish populations is exacerbated by other stressors like near record low flows, consistent high temperatures, and the disturbance caused by recreational activities.

We know that these stressors are extreme: 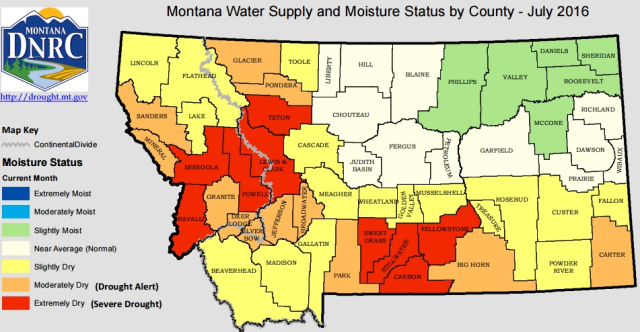 We also know that these conditions are not temporary. Droughts, warmer temperatures, and lower river flows are part of our future.

According to the article “Life cycle complexity, environmental change and the emerging status of salmonid proliferative kidney disease,” published in the journal Freshwater Biology in June, 2010:

“Environmental change is likely to cause PKD outbreaks in more northerly regions as warmer temperatures promote disease development, enhance bryozoan biomass and increase spore production, but may also reduce the geographical range of this unique multihost-parasite system. Coevolutionary dynamics resulting from host–parasite interactions that maximise fitness in previous environments may pose problems for sustainability, particularly in view of extensive declines in salmonid populations and degradation of many freshwater habitats.”

There are those in Montana who will say that this is an unfortunate chance outbreak of this disease, but it isn’t. This is what climate change looks like. It means that, as the conditions that promote diseases like PKD proliferate, so will future outbreaks of these and other diseases.

For those of us concerned about the future of this region it is a reminder that we need to guard against activities that can threaten our water. This includes oil and gas drilling, but many other activities as well. As Governor Bullock says, “We must be guided by science.”

The science is clear.

Update August 23: Excellent article in The Atlantic on the unique nature of the parasite responsible for the shutdown, “A Tiny Jellyfish Relative Just Shut Down Yellowstone River.”

…(T)he immune response that the fish are expressing would suggest that they have not been exposed to this parasite previously….That has concerned us since it would suggest it’s a new infection. At least we haven’t seen anything on this scale previously.”

“The other thing that’s concerning is from the histology results there were high numbers of parasites seen in multiple tissues. That suggests to us that the infective load that’s currently out in the river is very high. Why that’s a concern is that the sheer volume of parasites that’s out there makes it very easy for the parasite to be spread to other waters.”

Update August 24: Our post is featured in an article on the river closure on climatecrocks.com, which describes the evolving parasite as a “tiny winner” of climate chance. The article includes an item from the British Natural History Museum, which is ” examining how bryozoans act as a source of a disease in salmon and trout that is increasing in prevalence and severity as a result of environmental change.”

Update September 1: FWP issued a release today that announced the opening of some closed sections of the Yellowstone. From the release:

According to the Billings Gazette, this includes the Boulder and Stillwater rivers.

The Moses family has lived on the Stillwater River since 1974, when George and Lucile Moses retired and moved to the Beehive from the Twin Cities. They’re gone now, but their four daughters (pictured at left, on the Beehive) and their families continue to spend time there, and have grown to love the area. This blog started as an email chain to keep the family informed about the threat of increased fracking activity in the area, but the desire to inform and get involved led to the creation of this blog.
View all posts by davidjkatz →
This entry was posted in Uncategorized and tagged climate change, Stillwater River, Yellowstone cutthroat trout, Yellowstone River. Bookmark the permalink.

1 Response to The Yellowstone River closing: this is what climate change looks like