The landowners in the Silvertip Zone resubmitted their petition to the County Commissioners to establish a citizen initiated zone in Belfry yesterday. Landowners had originally submitted a petition to the Commissioners on August 18, but the Commissioners took no action based on advice from Carbon County Attorney Alex Nixon that the boundaries of the original zone were not contiguous, as required by Montana law. Nixon alos suggested the language in the petition did not provide enough specificity about the intent of the zoning.

According to Silvertip landowners Bonnie Martinell and Carol Nash, who presented the petition to the Commissioners, the new document addresses both concerns.

Martinell said she was particularly gratified at the eagerness of her neighbors to continue with the process. All but one of the original signatories in the redefined zone signed the new petition. “They believe this is necessary, and they are committed to seeing this through,” she said.

The petition was signed by 68% of the landowners in the zone. A minimum of 60% is required by Montana state law.

The Commissioners promised to respond soon. We’ll keep you updated.

A timeline of events regarding the Silvertip Zone:
October, 2013: John Mork, the CEO of Energy Corporation of America, announced the opening of an office in Billings and plans to hydraulically fracture 50 wells along the Beartooth Front in a move that would bring “a little bit of the Bakken” to the Beartooths. At about this time, ECA approaches a local landowner and offers a one-time payment of $4,500 for access to three acres of land to drill the well. The landowner was told they had no choice but to sign.

Protest in front of the Montana Board of Oil and Gas Conservation.

December: The Montana Board of Oil and Gas Conservation (BOGC) refuses to hear the arguments of concerned citizens and grants ECA a permit for the Belfry well.

January 8, 2014: Northern Plains Resource Council and its affiliate Carbon County Resource Council file suit against the BOGC, demanding a hearing on the well permit and reforms in the process by which the BOGC permits wells.

February 7: Analysis reveals that ECA has an abysmal safety record in Pennsylvania and West Virginia, with 66 inspections with violations, 90 separate violations, 55 enforcement actions, and fines totaling over $80,000 in Pennsylvania alone. You can download a copy of the actual report here.

February: BOGC accepts the demand in the lawsuit and grants a hearing on the well. 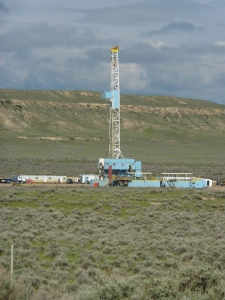 February 27: BOGC ignores public input and expert testimony, granting the permit as requested by a 6-1 vote. The location of the well is the Silvertip area in Belfry, detailed here.

March: Neighbors begin to discuss options to protect their land, water and way of life. Given the lack of protect from the BOGC and other state entities, they look specifically at options for local action.

May 14: ECA begins work on the well. Residents immediately become concerned that the company’s contractors are illegally drawing water out of a gravel pit near the site. A water right is required, and none exists. 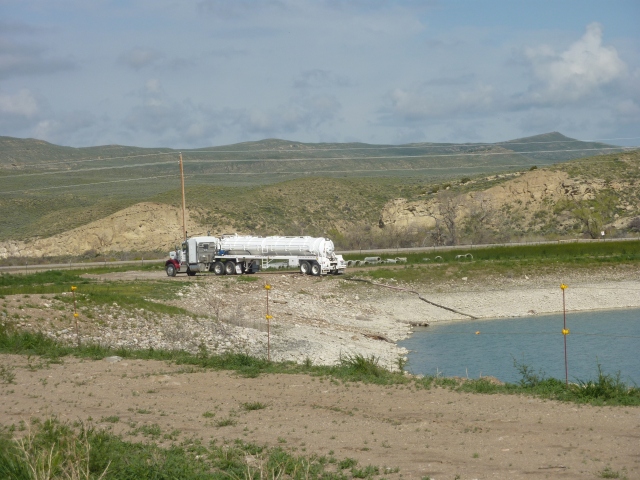 May 21: After receiving a citizen complaint and dozens of calls and emails from local citizens, the Montana Department of Natural Resources shuts down the illegal appropriation of water from a local gravel pit without a water right.

May 23: The contractor makes a deal with the town of Bridger to get one truckload of water per day until June 10. The deal was made without a public hearing.

July 7: ECA gives notice to the BOGC of “intent to perforate” the well. In addition they filed an “intent to stimulate or chemically treat the well.” Both of these are steps toward hydraulic fracturing.

According to Jim Halverson of the Montana Board of Oil and Gas (BOGC), ECA has told him that they plan on monitoring the results of the perforations for 30 days, then will apply to frack if they want to move forward. Fracking requires 48 hours advance notice to the BOGC.

As of November 20, no fracking of the well has taken place.

August 18: Landowners from the Silvertip area present petitions to the Carbon County Commissioners to establish a citizen initiated zone in their area. An overflow crowd supports the petitioners. You can view a video of the meeting below.

September 8: The Carbon County Commissioners invite ECA to speak before another packed meeting. Rather than send senior executives, the company sends the Belfry well project manager and a community relations representative based in West Virginia, who are unable to provide adequate answers to questions from the audience. Video of the meeting below, and my comments here, here, and here.

September 17: The Carbon County Commissioners hold an evening public meeting at Belfry School to allow public input into issues related to oil drilling in the area. ECA attorney Mike Dockery and the ECA project manager are invited in advance to speak, and Silvertip landowner Bonnie Martinell is asked to join them at the beginning of the meeting. Dockery makes a lengthy presentation in which he outlines ECA’s objections to the Silvertip Zone, detailed in a letter to the Carbon County Commissioners. You can read the letter by clicking on the photo at right.

The video below shows the entire meeting. It is a wonderful example of citizen involvement. There were many speakers with comments, questions and concerns. They represent different points of view, different levels of understanding, and personal experiences. It is exciting to hear people engage in the process. 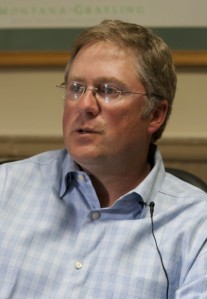 September 18: County attorney Alex Nixon provides feedback to the Silvertip Zone petitioners on the legal standing of their petition.

He advises the County Commissioners not to take action on the petition for one primary reason: the law requires that the land in a citizen-initiated zone be contiguous, and the Silvertip Zone is not a single contiguous parcel.

He also indicates that he has concerns that the petition is not specific enough about what is to be zoned, even though supporting documents are much more specific.  He said that this concern by itself was not enough to keep the Commissioners from acting on the petition.

He says that legal shortcomings are common in petitions of this type, and that he has been involved with many that required multiple iterations to achieve approval.

He recommends that the petitioners redo the petition, define the zone properly and come back.

Video of the meeting:

October 1: It is revealed that Energy Corporation of America is being sued for underpaying oil and gas royalties to hundreds, possibly thousands, of Pennsylvania landowners.

November 20: Silvertip landowners return to the County Commissioners with a new petition for a contiguous zone, signed by all but one of the original petitioners within the boundaries of the zone.

The Commissioners promise to respond promptly.

The Moses family has lived on the Stillwater River since 1974, when George and Lucile Moses retired and moved to the Beehive from the Twin Cities. They’re gone now, but their four daughters (pictured at left, on the Beehive) and their families continue to spend time there, and have grown to love the area. This blog started as an email chain to keep the family informed about the threat of increased fracking activity in the area, but the desire to inform and get involved led to the creation of this blog.
View all posts by davidjkatz →
This entry was posted in Community Organization, Politics and History and tagged Alex Nixon, Belfry well, Bonnie Martinell, Carbon County Commissioners, Carbon County Resource Council, Carol Nash, citizen inititated zoning, Energy Corporation of America, Mike Dockery, Montana Board of Oil and Gas Conservation, Northern Plains Resource Council, Silvertip zone. Bookmark the permalink.