Montana Climate Assessment says dramatic changes are coming; we need to be in action

According to the Montana Climate Assessment, published last week, the impacts of climate change are already being felt in the state, and will get more significant throughout the rest of the century. 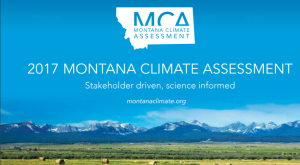 The Assessment is the work of 32 Montana scientists from the public and private sectors doing research with the Montana Institute on Ecosystems, a collaboration of the University of Montana and Montana State University. The publication is the first of a series, and focuses on the impacts of climate trends on three key sectors: water, forests, and agriculture.

Key findings of the study

What it means for the Beartooth Front

Folks, this report is what climate science looks like. These are Montana scientists, employed in state universities and the private sector, taking a transparent look at climate change and the state’s future.

That future is fraught with problems for the state: significantly increasing temperatures, leading to increasng demands on groundwater and more severe droughts, deforestation, more intense fires, and substantial demands for adaptation from the state’s agricultural sector.

And unless we take action, it’s going to be much worse. Look at the temperature maps above — if we do nothing, we’re looking at temperature increases approaching 10°F. That means we’ve got to take dramatic action to reduce carbon emissions: convert the energy sector from fossil fuels to renewables as quickly as possible, shift the transportation sector from internal combustion engines to electric vehicles. It means we’ve got to stop subsidizing the oil industry and put a price on carbon to drive innovation.

And even if we do those things, we’re still looking at significant temperature rise and impacts.

For those of us interested in acting locally, it means we’ve got to put our foot down when the oil man comes knocking, promising to bring the Bakken to the Beartooths. We’ve got to create local regulations to make sure that if they drill they do it responsibly, and we’ve got to push local elected officials who insist on dragging their feet.

Climate change could be devastating to rural Montana. The impacts on water, on forests, and on agriculture demand that we act quickly and with great urgency.

The Moses family has lived on the Stillwater River since 1974, when George and Lucile Moses retired and moved to the Beehive from the Twin Cities. They’re gone now, but their four daughters (pictured at left, on the Beehive) and their families continue to spend time there, and have grown to love the area. This blog started as an email chain to keep the family informed about the threat of increased fracking activity in the area, but the desire to inform and get involved led to the creation of this blog.
View all posts by davidjkatz →
This entry was posted in Climate change and tagged climate change, Montana Climate Assessment, Montana Institute on Ecosystems, Montana State University, University of Montana. Bookmark the permalink.

7 Responses to Montana Climate Assessment says dramatic changes are coming; we need to be in action