The Montana Board of Oil and Gas Conservation (BOGC) will take up the issue of whether to begin rulemaking on establishing oil and gas setbacks — the minimum distance between oil and gas wells and homes or other occupied buildings — on Wednesday, August 12 at 2:00pm in the Hearing Room at the BOGC office at 2535 St. Johns Avenue in Billings.

The public is encouraged to attend. If you can be in Billings for the meeting, please go. It is important for the BOGC to feel public pressure to move toward oil and gas regulation.

Montana is one of the few oil and gas producing states that has no mandated setbacks. Earlier in 2015, the Montana Legislature failed to take action on a bill to require setbacks. Montana remains well behind other states on basic water protection.

Action to implement setbacks is long overdue. You can read a detailed discussion of the reasons why it is critical for the BOGC to act here. 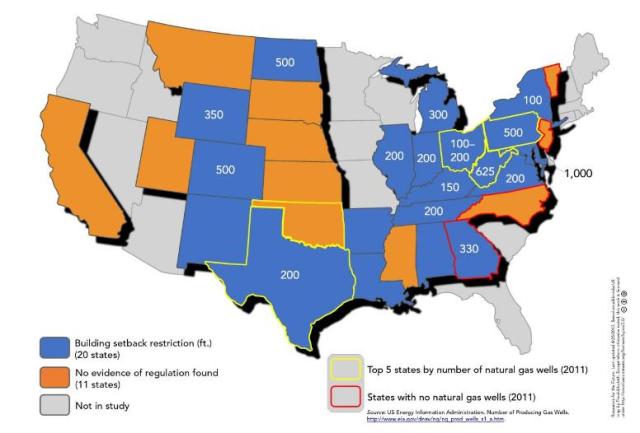 On Thursday, August 6, the Billings Gazette published the editorial below urging the BOGC to take action:

Put some distance between oil wells and Montana homes

Next week, the Montana Board of Oil and Gas should take a stand to protect the neighbors of future oil and gas wells. The board, meeting Wednesday in Billings, is scheduled to vote on whether to commence rulemaking to require a minimum distance between oil/gas wells and homes or other occupied buildings.

Montana’s neighbors, Wyoming and North Dakota, have setback requirements from inhabited structures, but Montana has none.

Sen. Mary McNally, D-Billings, sponsored a bill in the 2015 Legislature that would have prevented drilling within 1,000 feet of a home. Senate Bill 177 drew both strong support and strong opposition in a hearing before it died in Senate Natural Resource Committee.

The Board of Oil and Gas has been asked to address setbacks administratively. The issue is championed by the Northern Plains Resource Council, which at a hearing last month argued for “a dynamic rule that establishes different setbacks for various categories of inhabited buildings, public spaces, and well types,” including “a 1,320 foot setback from inhabited homes.”

With many variables in drilling, land and mineral ownership and spacing of residences, a setback rule may not be simple. But we believe it is worthwhile.

As it stands now, when the estate is split, mineral ownership trumps surface ownership. Surface landowners may protest a drilling plan at the board, but development may move forward on the property, even without the surface owner’s consent.

A setback rule would give the surface owners a minimal guarantee that their property interests will be considered.

Wyoming rules
The number of oil and gas wells drilled next to homes in Montana has been small, so far. Wyoming and North Dakota oil boards have recognized the importance of dealing with setbacks after drilling commenced in the vicinity of homes. Those states are no more populous than Montana.

The Wyoming Oil and Gas Commission this spring increased the setback from 350 feet to 500 feet from “occupied structures,” defined as “a building that was specifically constructed and approved for human occupancy such as a residence, school, office or other place of work or hospital” and not sheds, barns or garages.

North Dakota also has a 500-foot setback. Colorado’s rule can require a setback from occupied structures of more than 1,000 feet.

There’s considerable scientific evidence that living or working day after day close to oil wells can cause adverse health effects. But the Wyoming commission in April concluded that there was no “definitive science” to provide “clear guidance on setbacks”.

There is, however, the matter of folks being secure on their home property. Having an oil well in the backyard can significantly reduce property value.

Noise, trash and dust
Bainville cattle rancher Robert “Pat” Wilson, who has oil development on his property, said it brought unexpected problems of heavy truck traffic during the drilling and fracking, lots of trash (including milk jugs filled with truckers’ urine), dust and ongoing noise from the pump. Wilson, who owns and leased his mineral rights, told the Board of Oil and Gas about his concerns that prolonged exposure to volatile organic compounds in the minerals may increase risks of cancer and other serious health problems.

Dale Nelson, a Homestead farmer, told the board that a 1,000-foot setback would protect his family from the potential dangers of oil wells near his property. A veteran firefighter, Nelson described fighting oil well fires sparked by lightning: “The toxic smoke that comes out with a fire, there’s nothing you can do with it. Do you want your grandkids around something like that?”

Jim Halvorson, administrator for the board, noted that there have been few conflicts in Montana between drillers and homeowners and when there were, an agreement usually worked out.

The next boom could be different. What if oil development moves toward a more populous area? Let’s not wait until the crisis is at hand. It’s better to make a good rule now.

Be proactive
Halvorson points out that surface owners already may protest a development plan. That can be helpful, but it puts the burden on the landowner, who probably knows a lot less about the board and its rules than the oil developer does. Providing the landowner with a minimal setback protection helps level the playing field.

Any new rule should allow the property owner to waive or reduce the setback requirement. The rule should allow the property owner to petition the board for a greater setback if they can show that the particular circumstances of their property and the proposed development warrant a variance. Those are the kind of details — along with setback distance — that need to be addressed in a reasonable rule.

We call on the seven citizens who serve on the Board of Oil and Gas to vote Wednesday to begin the three- to five-month process of crafting a rule.

Other state oil and gas boards have administratively created setbacks to protect homeowners. Montana should take a cue from its neighbors and do likewise. Future conflicts between residents and resource development can be reduced if the Board of Oil and Gas seizes this opportunity to be proactive.

One final note: Jim Halvorson‘s notion expressed in the editorial above that “surface owners already may protest a development plan” assumes that we have all forgotten what happened when Belfry owners tried to protest a development in their community. The BOGC attempted to block the protest, had to be sued to allow the protest, and then ignored every argument made by concerned citizens. Read all about it here.

The Moses family has lived on the Stillwater River since 1974, when George and Lucile Moses retired and moved to the Beehive from the Twin Cities. They’re gone now, but their four daughters (pictured at left, on the Beehive) and their families continue to spend time there, and have grown to love the area. This blog started as an email chain to keep the family informed about the threat of increased fracking activity in the area, but the desire to inform and get involved led to the creation of this blog.
View all posts by davidjkatz →
This entry was posted in Community Organization, Politics and History and tagged action alert, Montana Board of Oil and Gas Conservation, setbacks. Bookmark the permalink.